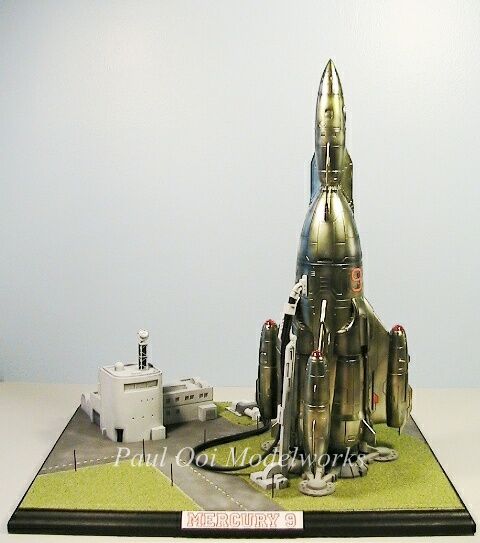 Pegasus Models recently issued a 1/350th scale model that reflects the way science fiction movies of the 60’s used to portray space rockets. This project was what the modelling world calls an out-of-box build where the parts come entirely from the plastic parts supplied by the kit, no after-market parts, except for the wooden base and grass mat. This was a commission for a shop display and again, a nice short break from the “serious” subjects. For those of you out there who would like to super-detail this kit to the n-th degree, Paragrafix came out with a photoetch fret, and TSDS came out with a super decal set. Neither of those parts were used in my project. 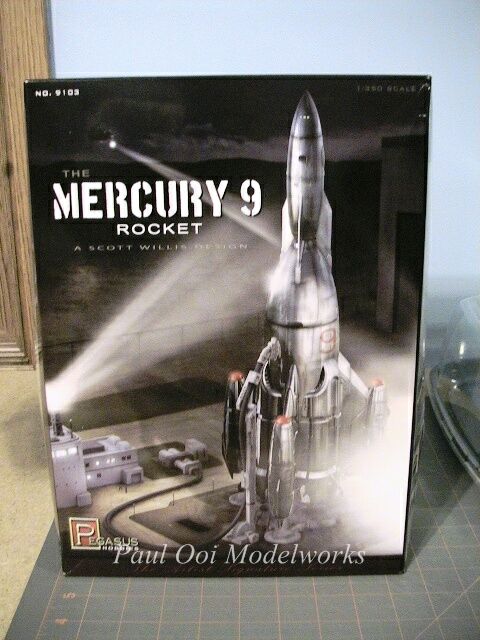 This kit has some pretty large pieces of plastic sections to make the main rocket. By comparison, the actual crew compartment and landing module is just the last 3 inches of the rocket. About half of the parts in the kit go to making the ground structures (command center, launching pad, fuel unit and tower, the last one looking like an over-sized fuel pump at a gas station). 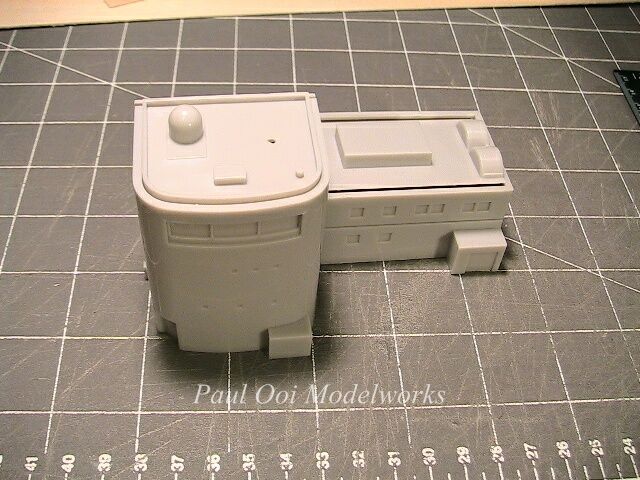 I started by building all the ground support structures first except for fueling tower that requires dry fitting to the completed rocket module, so I kept that one to the last. The command building had recesses that looked like large bay doors, so I inserted ribbed plywood sheets (from a doll house supply section) to simulate roller shutter doors. 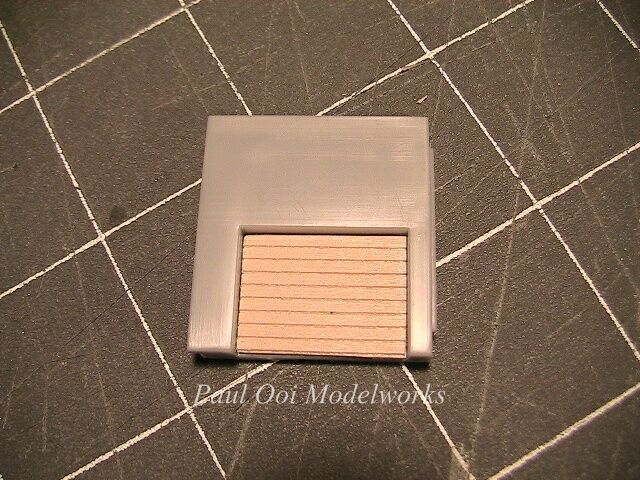 Very soon, all the ground structures have been put together. Since I intended to prime the building with a “rough” finish to give it some texture resembling poured concrete, I masked all the windows to allow the smooth plastic to simulate glazing as a contrast. 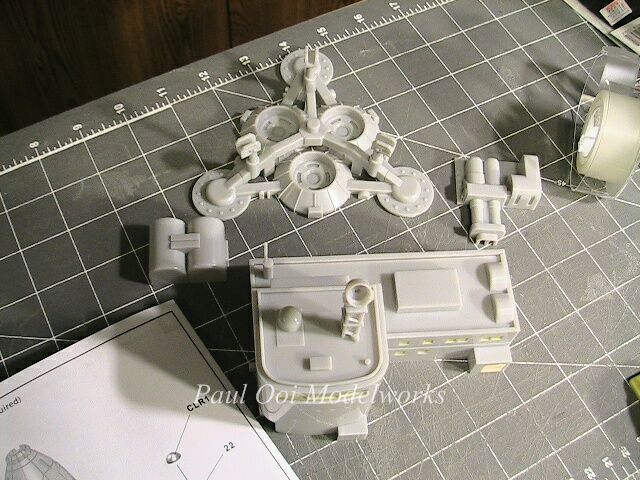 One of the more troublesome parts in this kit is the “fuel line” assembly, made out of a section of dual-core wires that needed to be glued to the fuel terminus on one side and the oversized “fuel pump” dispenser on the other end. I used Loctite 770 primer on the wire insulators as a preparatory step to bond them to the kit plastic parts using cyno-acrylate glue (Superglue in layman terms). Without the primer, the slightly waxy wire insulators may not bond properly. 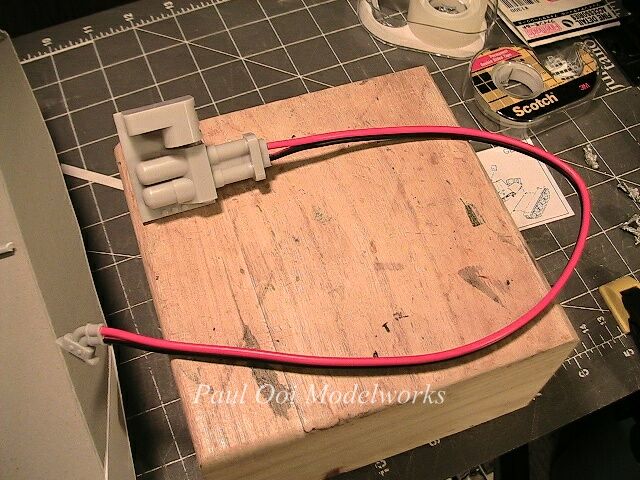 Subsequently, I coated all the ground structures with Armory Black Primer. This primer gives a very matt finish and slightly rough effect that works well to give the building that concrete effect I was talking about. The primer also clings well to that troublesome fuel line to provide a layer for subsequent layers of paint to “grab on to”, since that wire insulator material does not react well with enamel or acrylic paint directly.

While the ground structures are drying, I start working on the rocket proper. There weren’t many parts to deal with but getting the joints nice and smooth, and filing away all rough spots are key to the metallic finish that the model demands. It may not be “rocket science” (pun intended), but surface finish and plastic polishing using an agent like Novus Grade 2 makes all the difference for the bright metallic finish that follows. 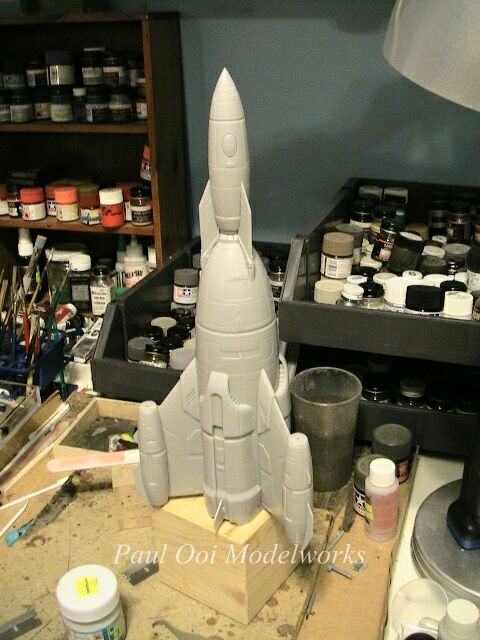 For the rocket itself, the client suggested using Alclad’s Titanium Gold as the final finish although the kit instructions called for a steel finish. This is where science fiction model gets fun because one could pretty much go with whatever suit the fancy. To use Alclad, I start by under-coating the whole rocket with Gloss Black Primer to protect the plastic from the subsequent metallic layer. The primer layer needed 2 days to dry properly. 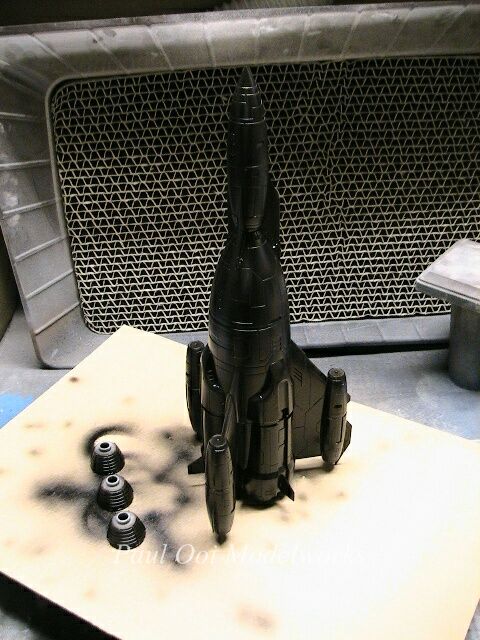 The metallic paint goes on in several layers of thin misty coats. Alclad gives a really fantastic metal shine to the rocket that is hard to equal. The black primer coating also provides an excellent pre-shading layer that I used by changing the intensity of the metallic layers to create the effect of panel lines and some weathering as well. Once the final coat dries(give about 2 days), the kit decals get applied. 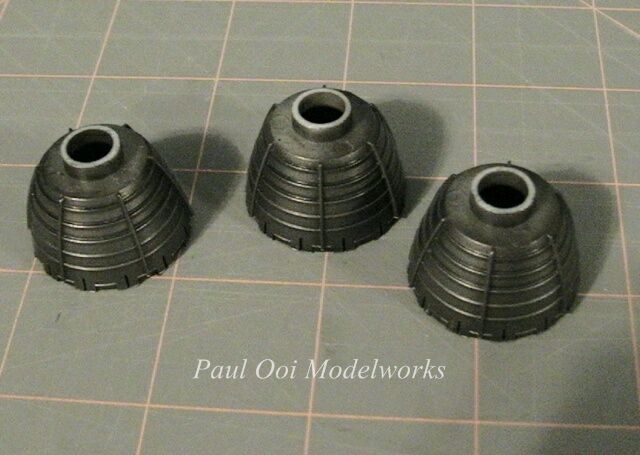 While the rocket paint was drying, I made the wooden base and applied sections of grass mat obtainable from miniature railway hobby stores. The tarmac was painted with several different shades of gray. Finishing touches include the attachment of the bright red lights on each booster rocket (not sure if you need navigation lights in space, but they look good on the rocket). 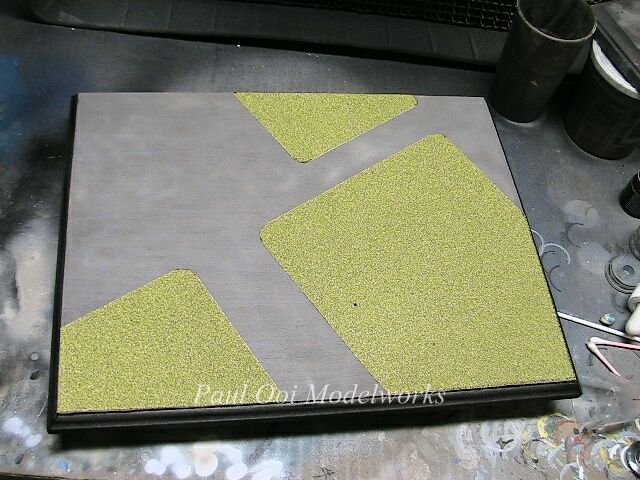 Test placement of the support structures were an important part of this project as space was (obviously) limited on the base and I wanted to achieve the correct look on the final diorama. Several different layouts were considered before permanently attaching these structures to the base. 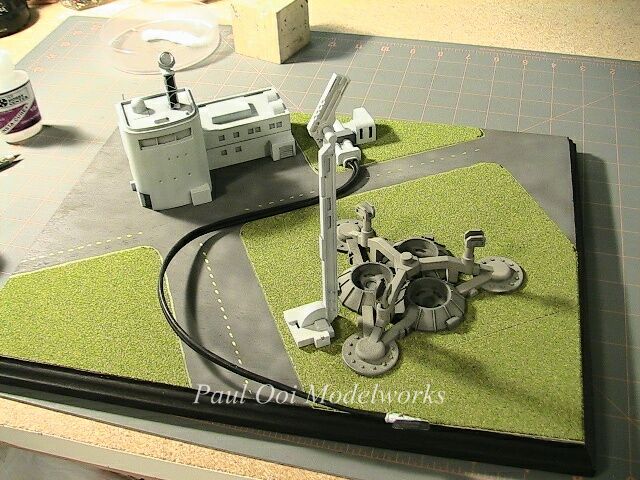 Finally, the rocket gets attached to the launch pad and we are ready for a blast-off! 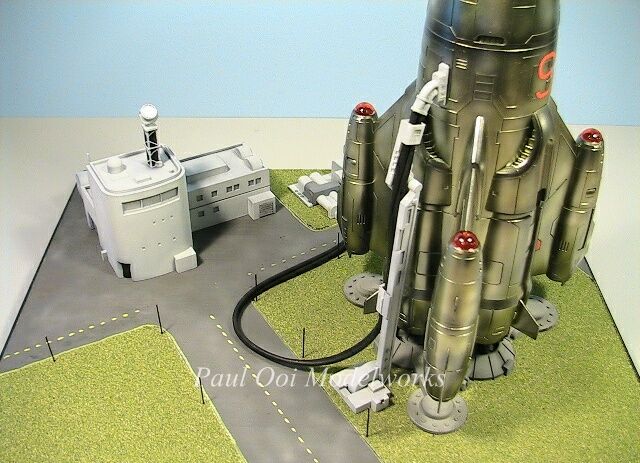 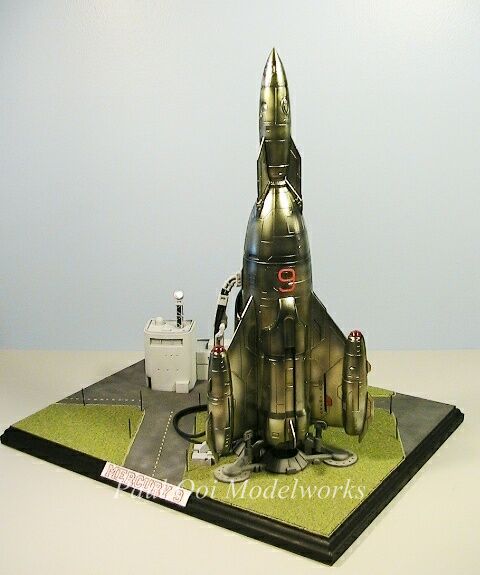 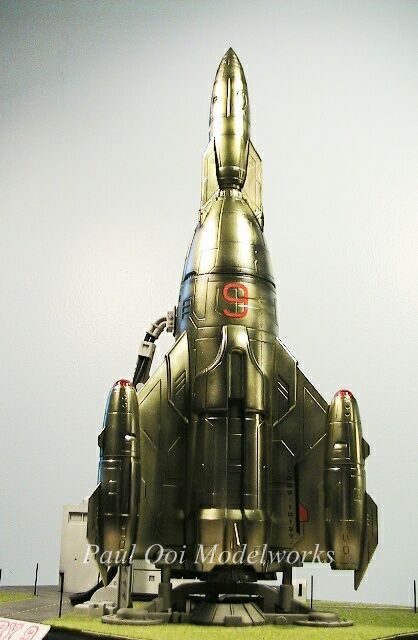 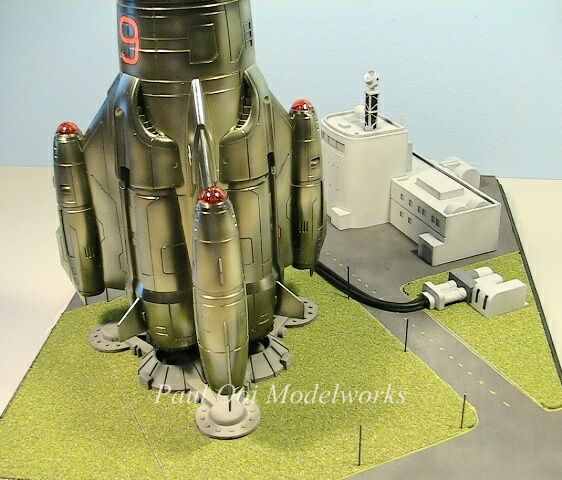 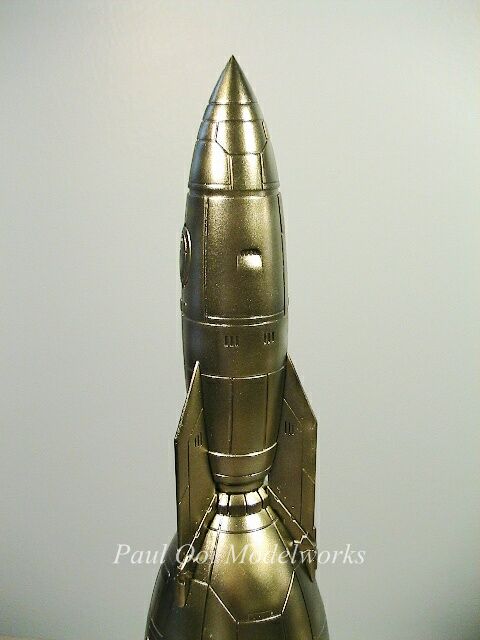 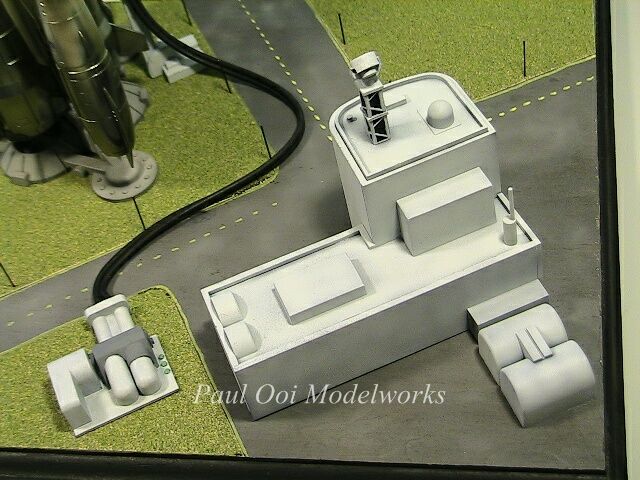 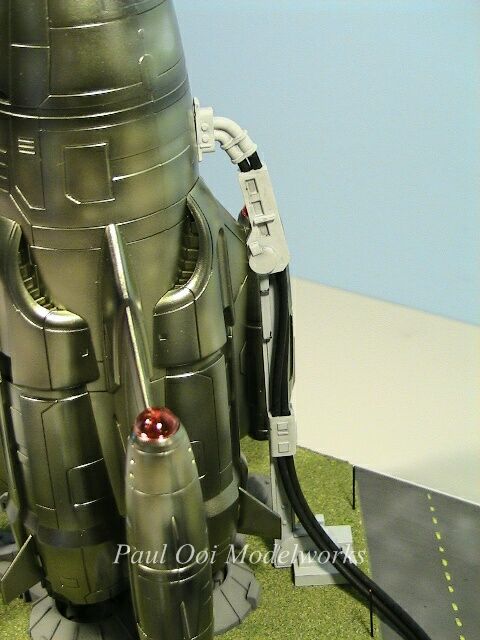