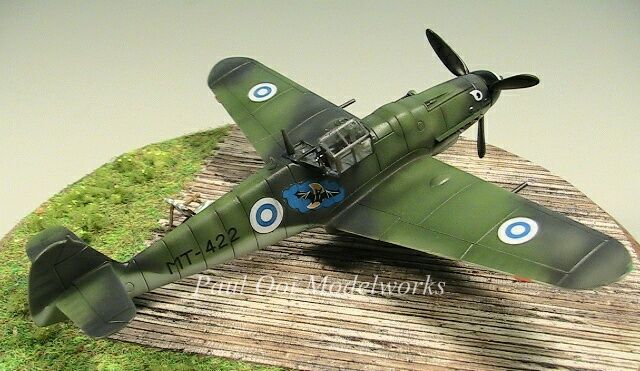 The Messerschmidt Bf109 G-6 was a 1944 version of the famed German fighter plane operated not only by the Luftwaffe but also some of the other Axis allies. One of the most successful users of the Gustav, as the mark G was known, was Finland. Affectionately referred to as the “Mersu” by the Finns, the fighter was at the spearhead of Finnish defense against the Soviet attempt to break into Finland in mid-1944. The Suomen Ilmavoimat (Finnish Air Force) carefully concealed their aircraft in pockets of forest revetments and took a fearful toll on Soviet aircraft, blunting the offensive and fought the Red Army to a standstill.

This aircraft portrayed in my project is from the spring of 1948 with the later Finnish national markings that is till being used today. The setting is a field revetment in a concealed position during a period when Finland was trying to maintain a tenuous existence as a democracy bordering the Soviet Union. The Soviets had demanded for the removal of all German-built equipment from the Finland but the Ilmavoimat managed to keep the Mersu running until at least 1950 after which they were replaced. It is notable that this post-war version has one of the few examples of a shark’s mouth motif on a Bf 109. 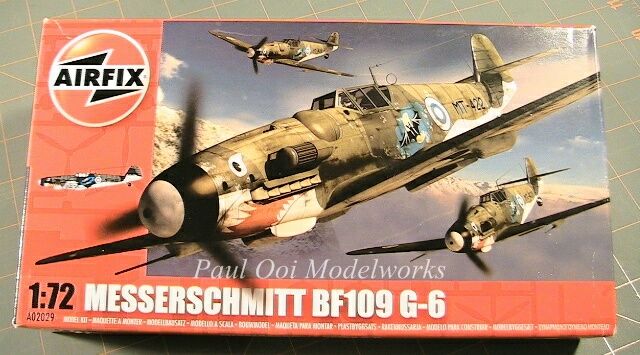 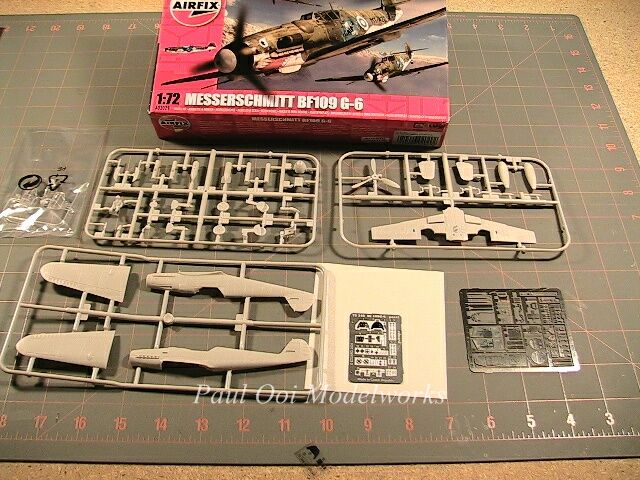 This 1/72 scale kit is an entry level one by Airfix with relatively simple construction and very sparse cockpit details. However, the exterior details are pretty good and the decals are excellent. I added the photo-etched set from Eduard and also a spare canopy section from Squadron meant for the Hasegawa kit. The photo-etched kit literally re-builds the entire cockpit interior with phenomenal detail in 1/72 scale. 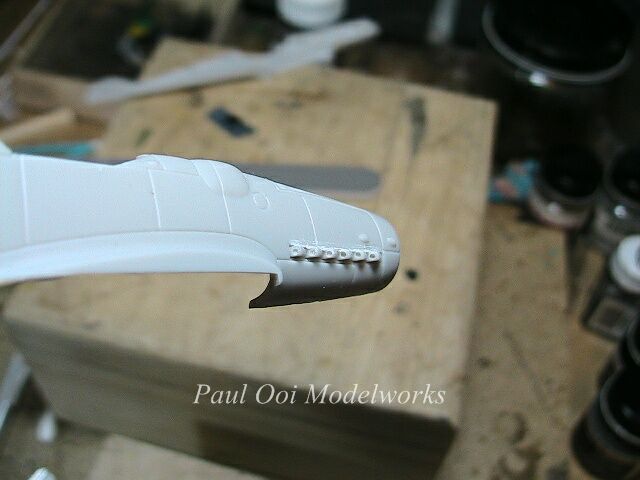 Some necessary micro-detailing was done like drilling out the nasal exhausts and also the cannon gun barrels. 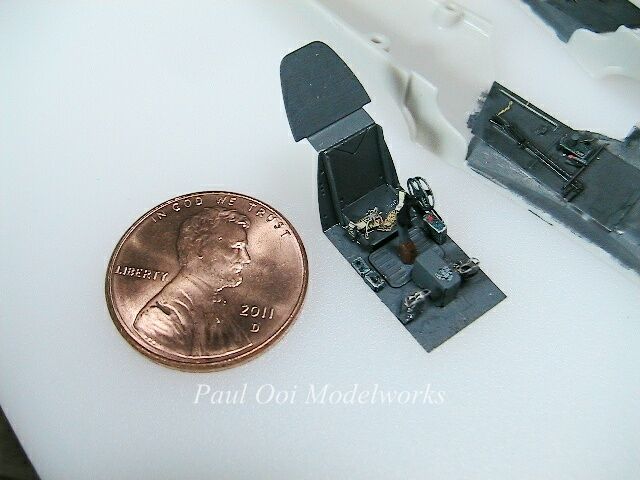 The construction of the cockpit was very intensive. Many details were added to the side walls and the entire floor and seating section was built from the photo-etch kit. Similarly, the instrument panel (there was none in the kit) was built using the photo-etched parts. I also scratch-built the pilot’s control column using spare parts from my plastic stash. Here you can see the cockpit section as compared to a US one-cent coin (18mm in diameter)! 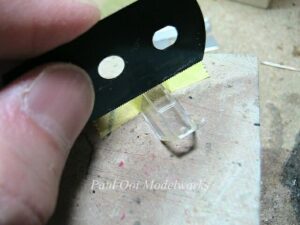 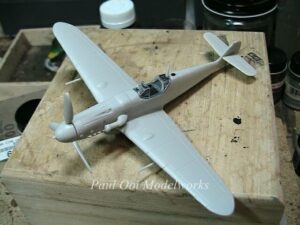 Another nerve-wracking operation was cutting out sections of the one-piece canopy so that I could display the aircraft with the middle canopy section opened to reveal the hard-earned details of the cockpit. I used a micro saw to perform this delicate task in 2 cuts. The open middle section was replaced with the vacuum formed canopy from Squadron. 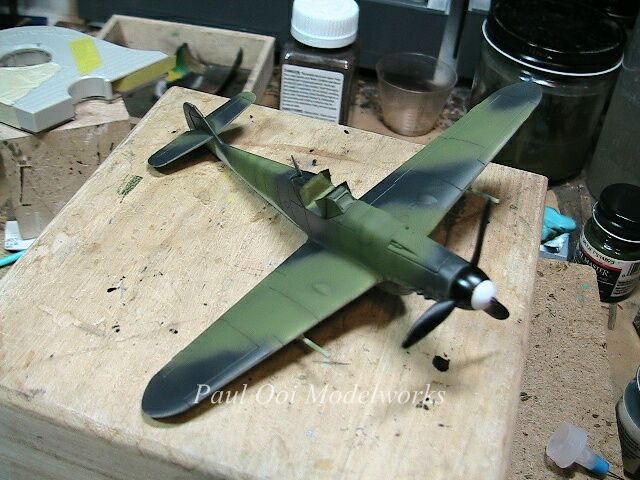 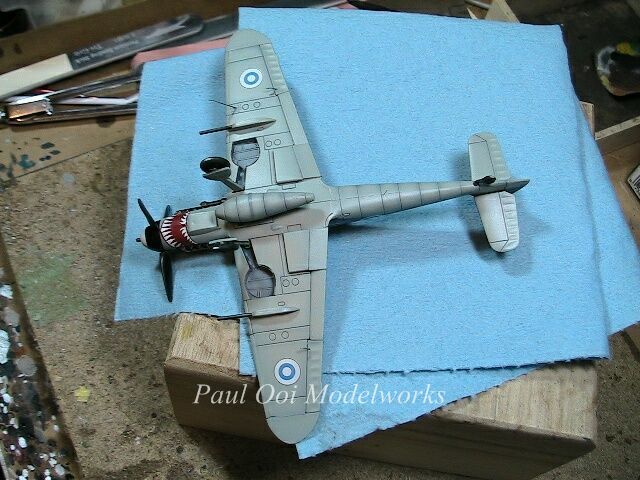 I painted the aircraft in the typical Finnish two tone upper camouflage of Oliviinvihrea (Olive Green, 3 parts FS34079: 1 part white) and Musta (Black, 5 parts matt black: 1 part white). The underside is painted with the late-war German Hellblau (3 parts Japanese Navy Grey: 1 part RLM65 Hellblau) which is a very light grey with a blue tinge. Weathering of the topside of the aircraft was done using a very fine spray of German Dark Yellow. 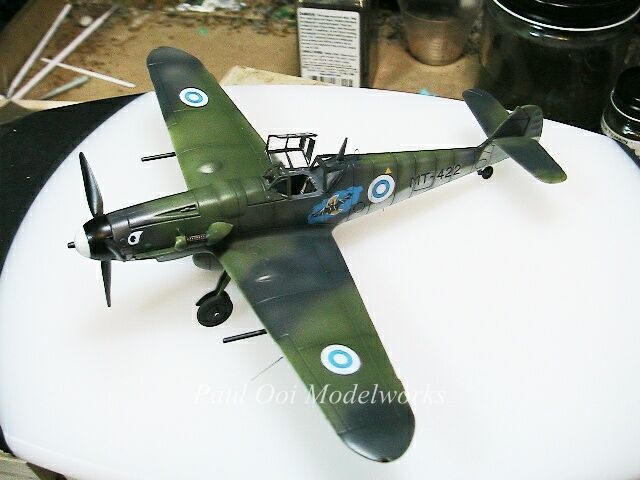 The decals went on very nicely and did not need much in the way of setting agent. Then the aircraft was coated in a satin varnish for the final finish. Exhaust stains were added using an airbrush and chalk pastels for subtle weathering of the wings and the fuselage. 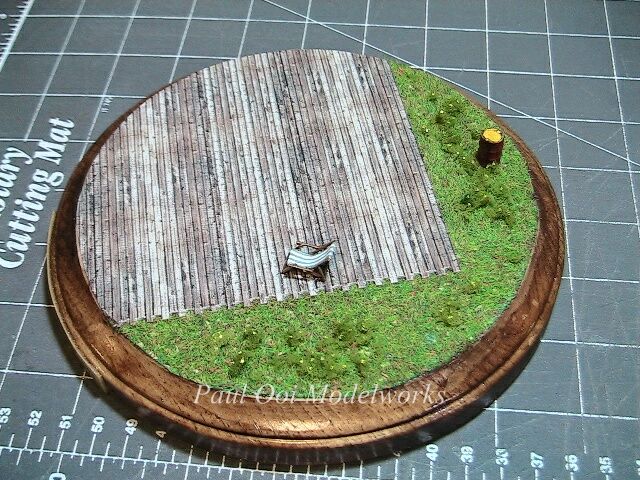 I build a base portraying a wooden plank revetment tucked away in a forest meadow, borrowing from pictures of German field revetments. There are very few pictures of Finnish aircraft on the ground from that period. The ones from WW2 show bare soil revetments, but I thought that given 3 years of relative peace, the Finns may have built a hard stand for easier maintenance of the aircraft. This mini project is the subject of a tutorial in this website. I am totally delighted with this little vignette and the whole model came together very nicely in a relatively short. Enjoy the pictures. 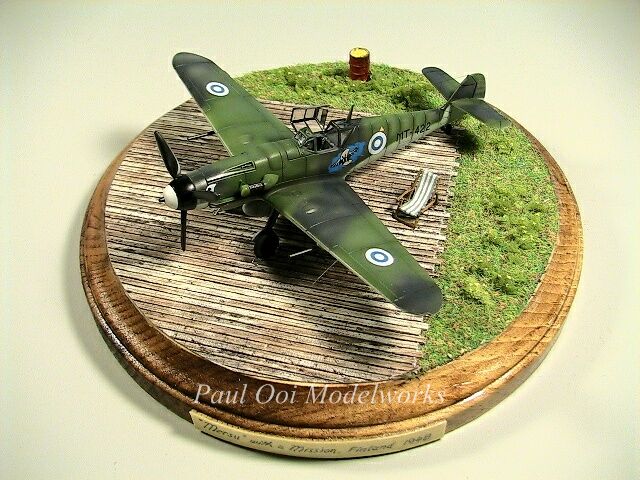 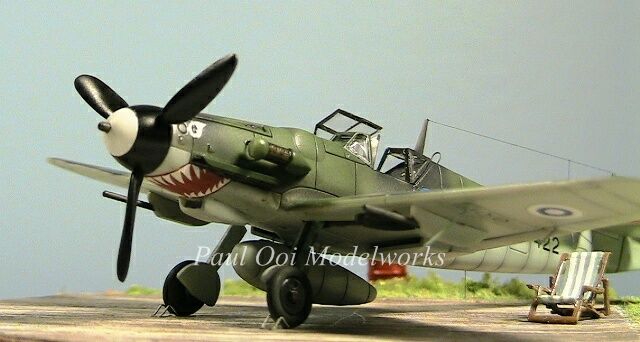 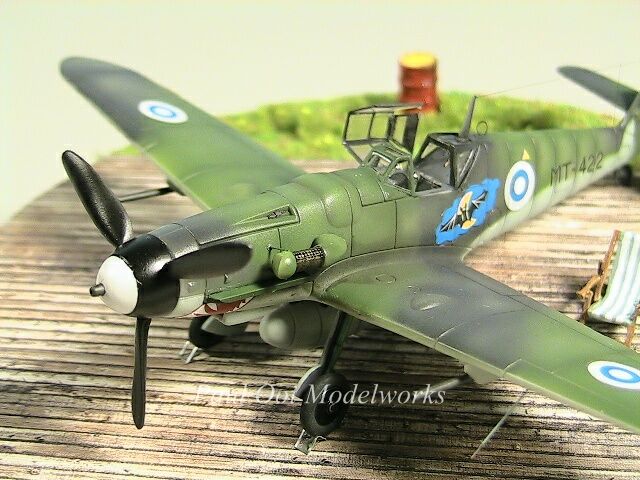 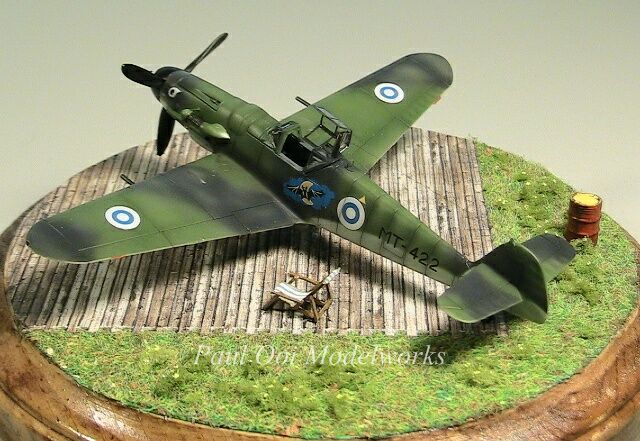 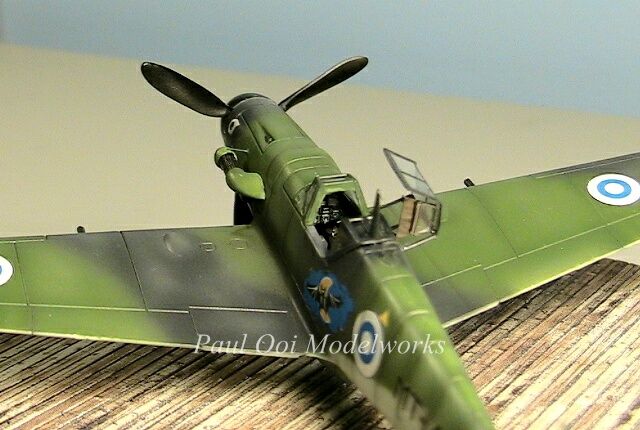 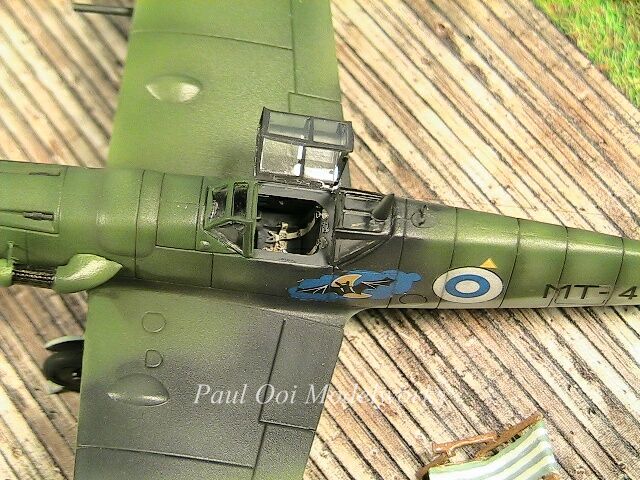 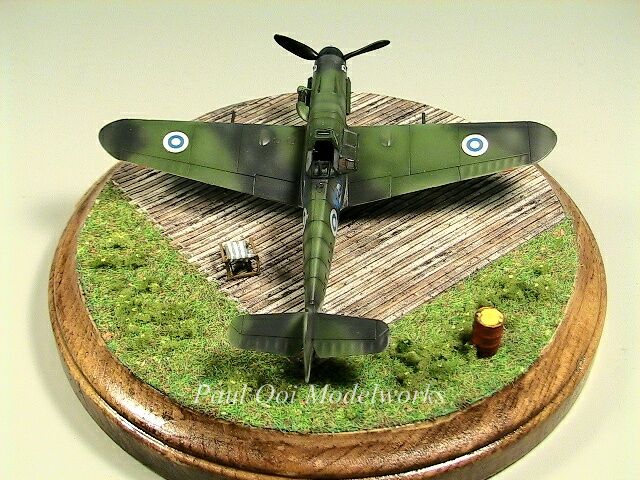 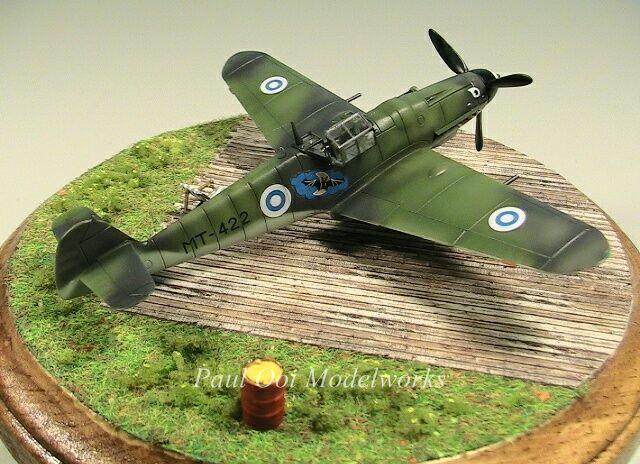 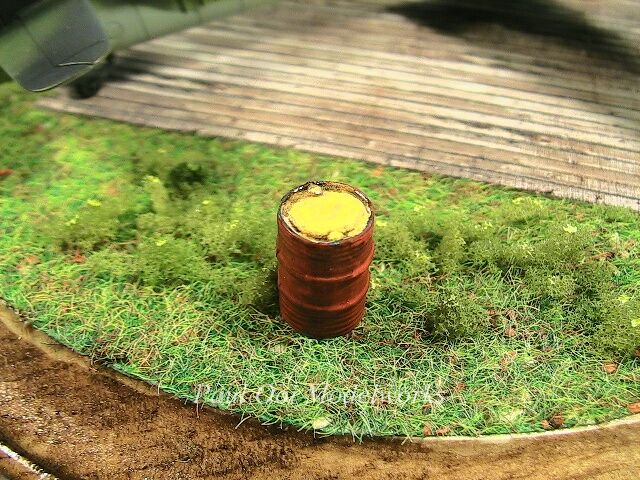 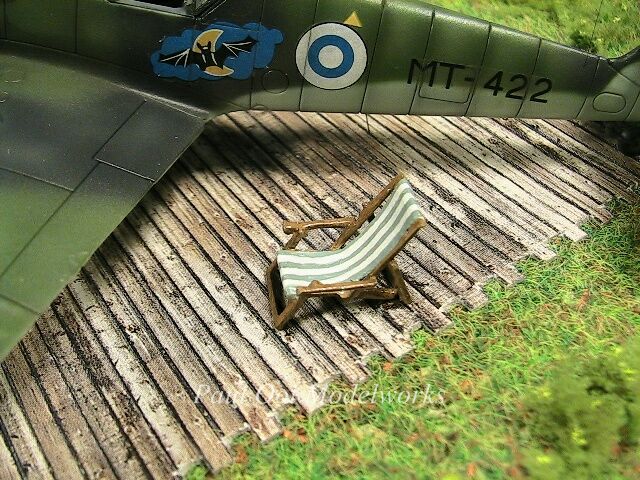 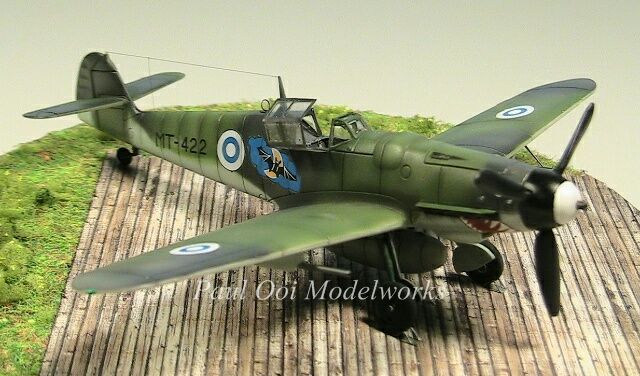 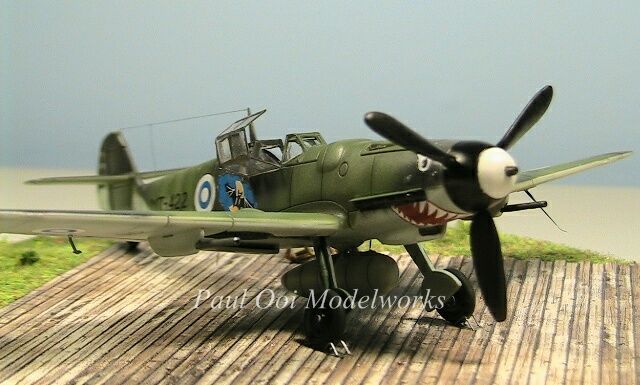 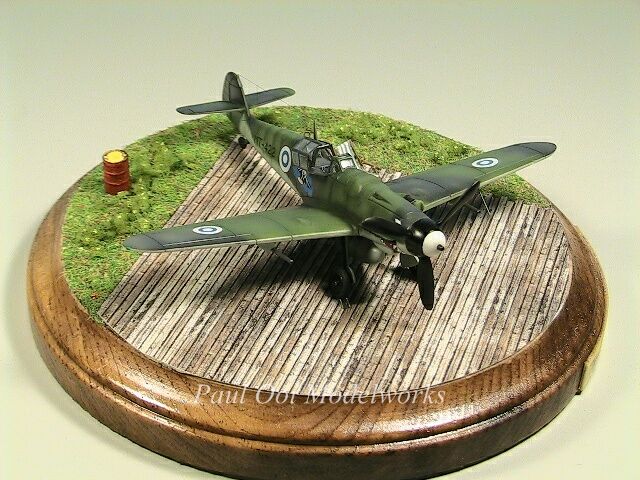