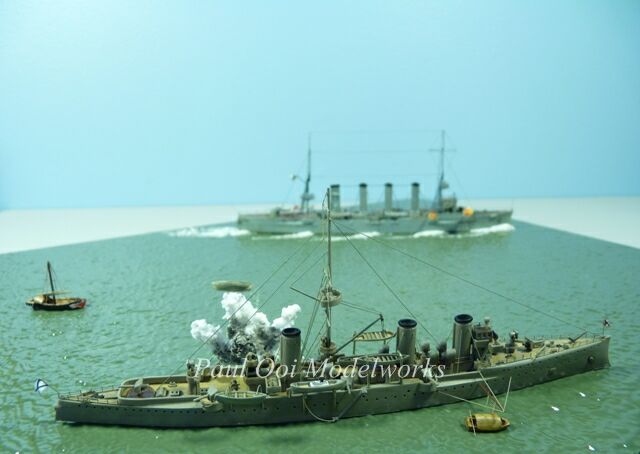 The Battle of Penang in World War 1 was fought between the Imperial German Navy’s light cruiser SMS Emden and several Allied ships in the harbor of Georgetown and also the North Channel of Penang Roads on the 28th October 1914. One of the victims of Emden’s surprise attack in that battle was the 2nd Rank protected cruiser Zhemchug of the Imperial Russian Navy. She was one of the few survivors from the battle of Tsushima Straits against the Imperial Japanese Navy ten years prior. 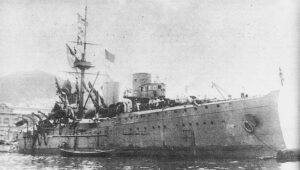 The Zhemchug was part of the Allied task force that was sweeping the Indian Ocean between Malaya and India looking for Emden after the latter had attacked several Allied merchant ships. After her patrol, the Zhemchug retired to the port of Penang to re-supply and was anchored off Fort Pier directly in front of Fort Cornwallis, the British fortress at the tip of the promontory.

Failing to post a lookout, her captain absent and half the crew on shore leave, the Zhemchug was totally unprepared for action. The Emden arrived in port in disguise as the HMS Yarmouth coming in from the Andaman Sea at 5:15 am and moved up to as close as 200m alongside the Zhemchug before firing a torpedo into her after which the forecastle was raked with cannon fire. This is the very moment portrayed in the diorama. A second torpedo struck the magazine under the bridge and sank the Zhemchug. 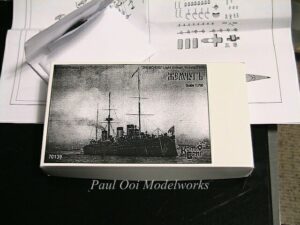 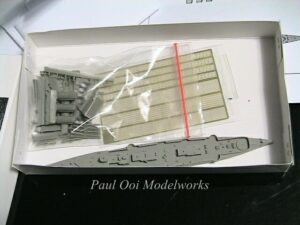 This 1/700th scale resin kit is made by Combrig of Russia and I was delighted by the crisp casting of the hull. The kit did not have any metal parts so I supplemented this with a fret of IJN railings and ladders photo-etched parts and several crew boats from my spare parts stash. I also obtained several good pictures from a Russian magazine on Zhemchug, including one very detailed photograph from 1909 showing the retrofit where the original 3 masts were reduced to the center one and 2 more 120mm guns were added. 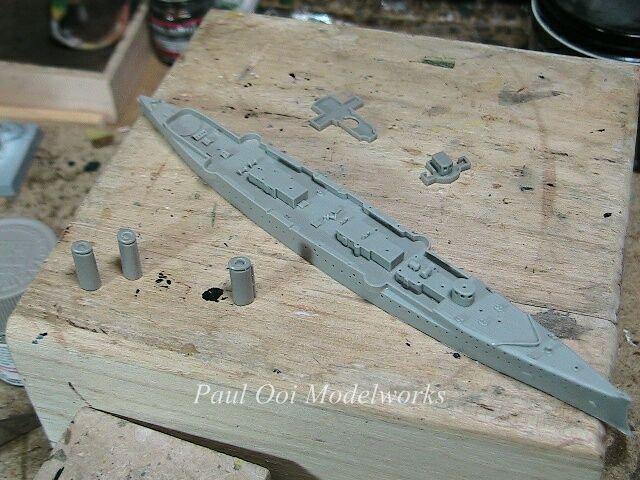 After cleaning the resin hull and drilling out the funnels, I painted the assembly with Tamiya Medium Grey XF20, approximately the color adopted by the Russian Far East Fleet in the recovery period after 1909. Combined with the single mast, Zhemchug in 1914 looked very different from 1904. 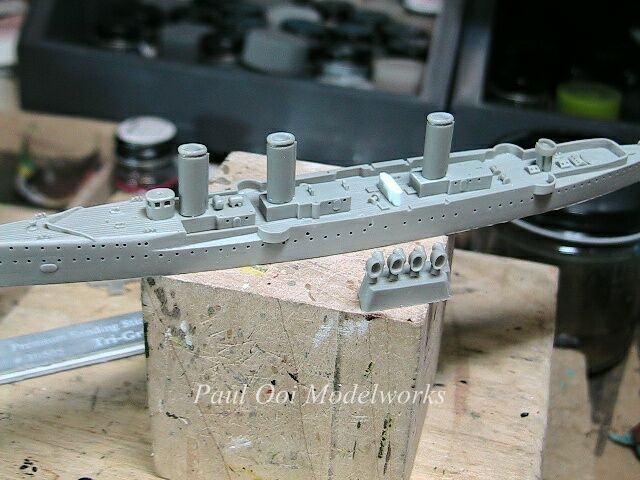 In comparing with reference drawings and the instruction sheet, I realized that the resin hull was missing a section for the base of the main mast. I added some plastic stock to build the missing section. 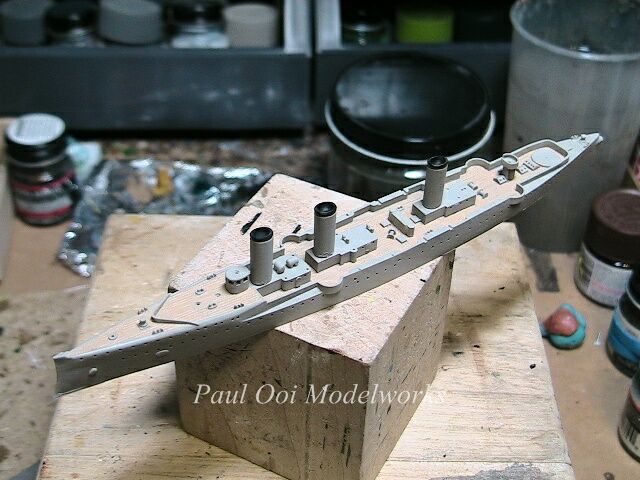 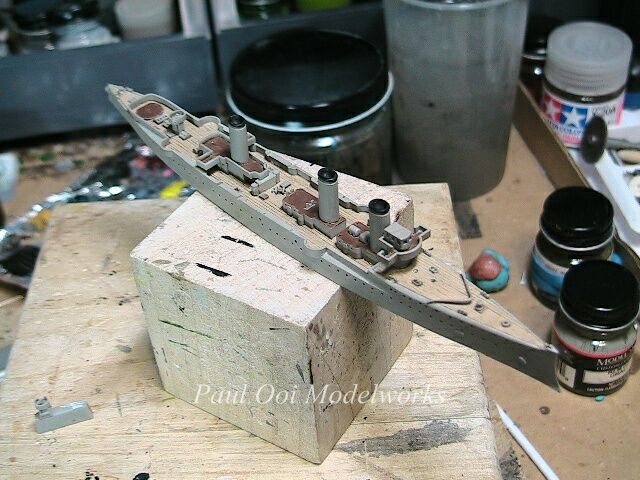 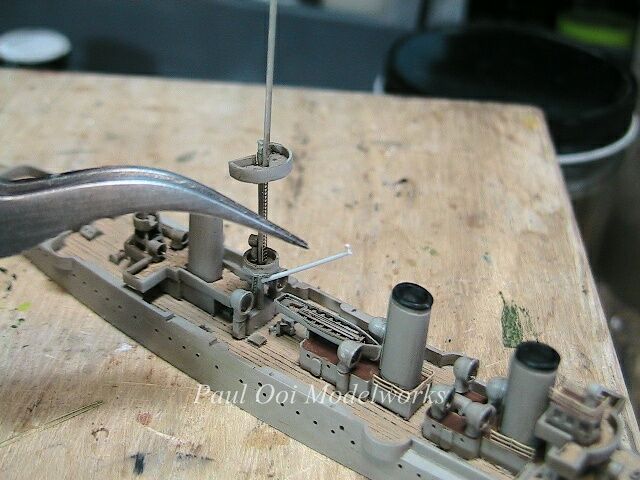 I then proceeded to build the main mast and the hoist derrick, using photoetched pulleys leftover from some IJN Tom Modelwork frets. The mast cross spars were built from R16 brass wires. 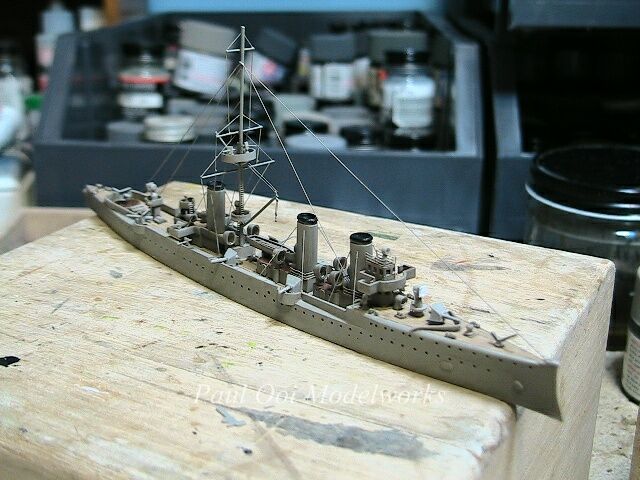 Rigging was done starting with the funnel braces, and then the main mast itself with the help of a good line diagram of a sister class to Zhemchug, the Novik class cruiser. 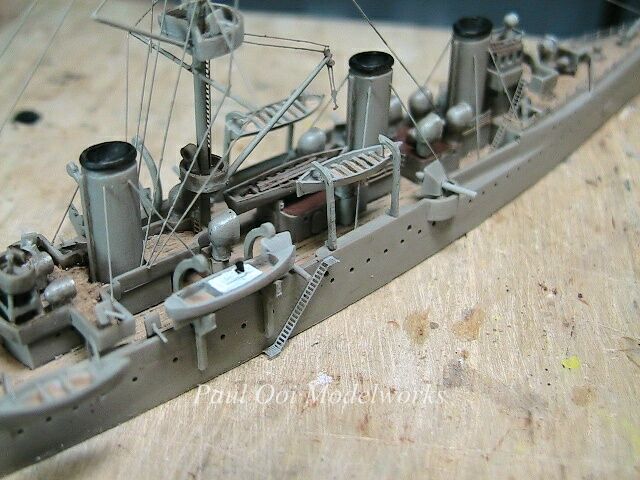 Final detailing with the addition of life boat derricks and the ship’s gangway recycled from another photoetched fret of Soviet cruiser parts! 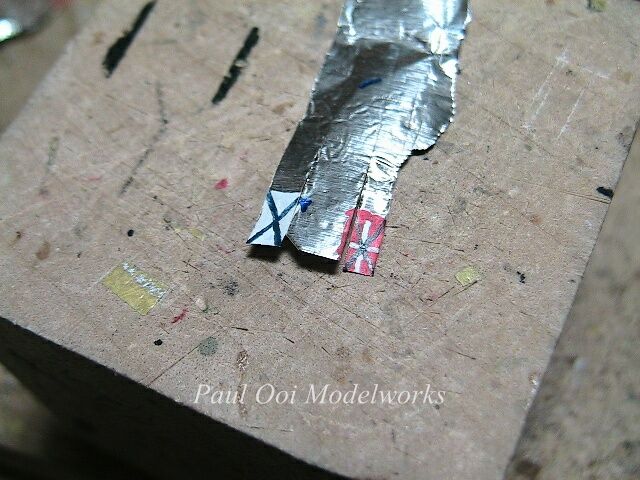 The front and rear Russian Navy ensigns are hand-painted from aluminum foil. The rear ensign has been re-adopted by the modern Russian Navy, a blue cross of St. Andrew on a white field (this is actually one of the oldest naval ensigns still in active use in the world today, dating back to 1700 in the reign of Peter the Great). The front jack is a blue cross of St. Andrew imposed over a red field and white cross, also dating from 1700 and currently in use by the Russian navy. 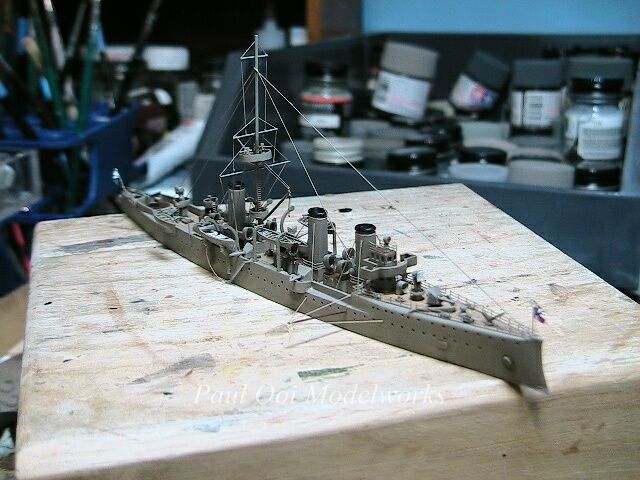 Finally the vessel is ready to take to water, at least until the torpedoes struck! 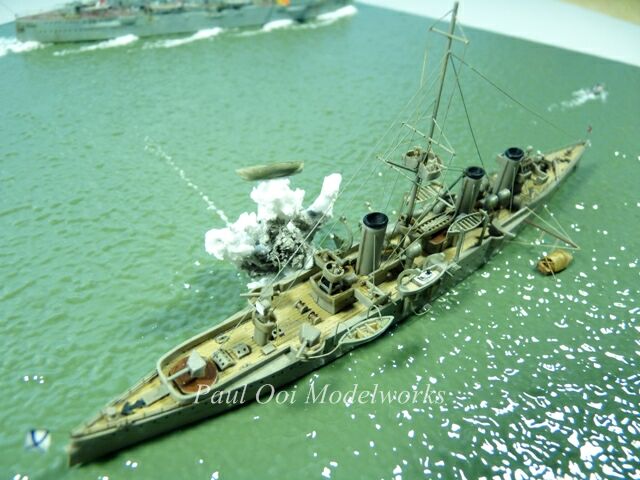 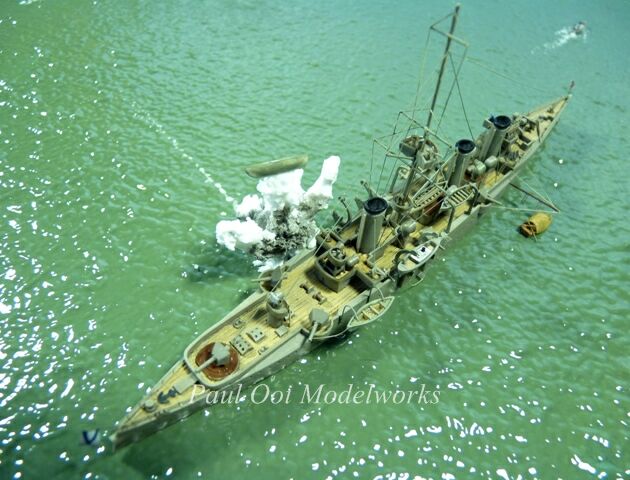