Home / Figures / The Coronation of Napoleon Flat Figure Set – The Emperor crowns himself! 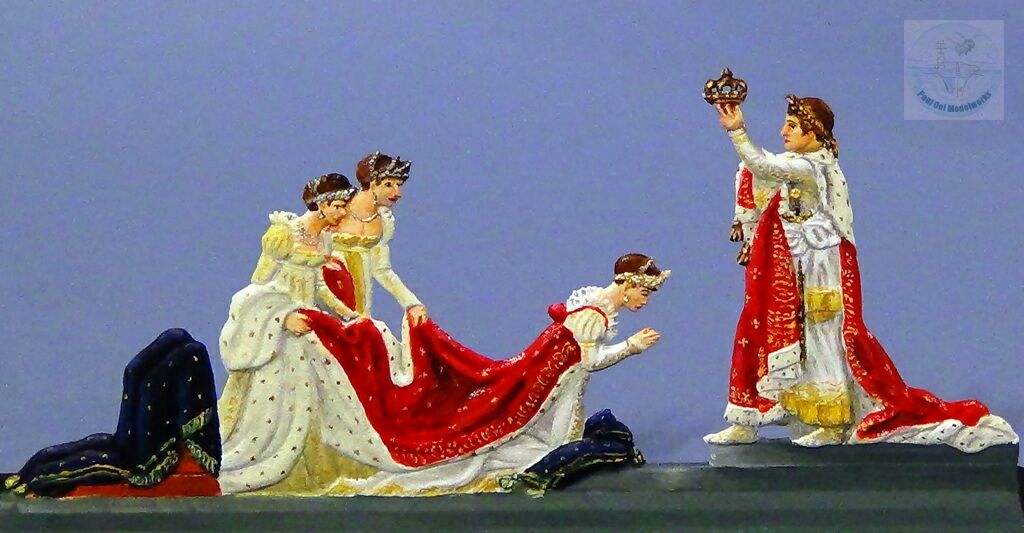 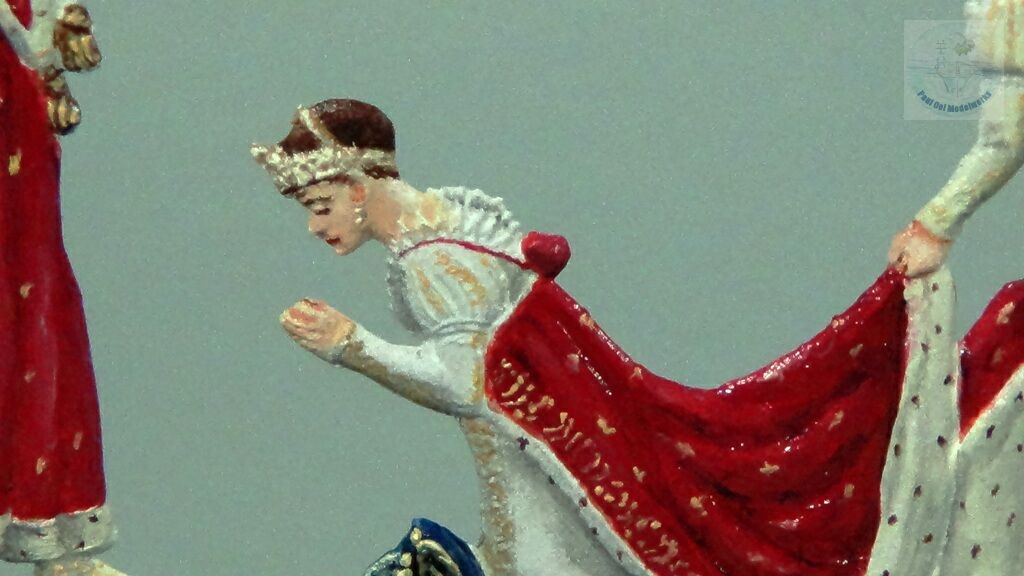 The grand coronation painting in the Louvre entitled “Consecration of the Emperor Napoleon I and Coronation of the Empress Josephine in the Cathedral of Notre-Dame de Paris on 2 December 1804″ or commonly just called Le Sacre de Napoleon” is a propaganda masterpiece by the artist Jacques Louis David. Instead of being crowned by Pope Pius VII, Napoleon reputedly placed the gold laurel leaves upon his own head, and then proceeded to crown Josephine, with the pontiff just watching. The people portrayed in this huge 20 feet by 30 feet painting was a lexicon of the First Empire’s dignitaries, numbering Napoleon’s siblings, French marshals, politicians, and dignitaries of the church. The flat figure set focuses on the very heart of the action, showing Napoleon, the empress Josephine and her two robe attendants. 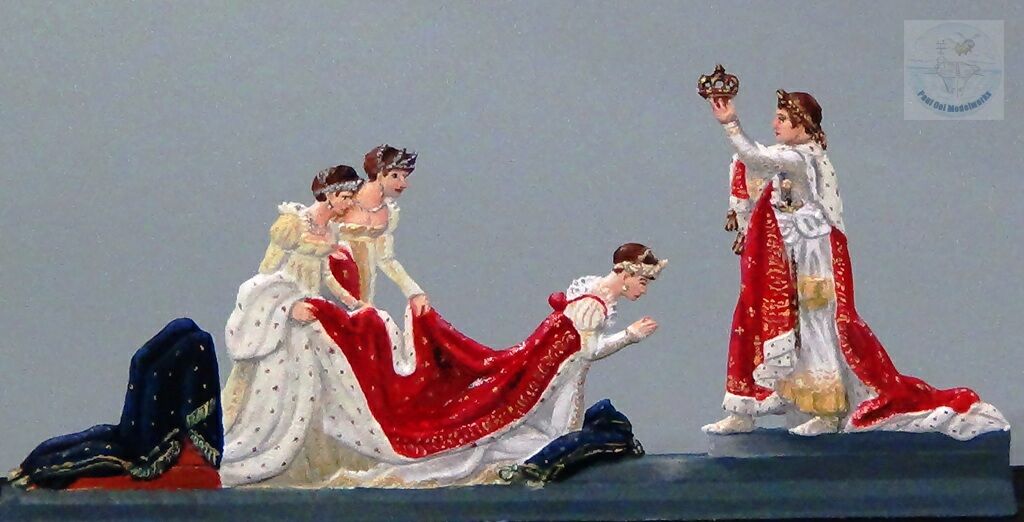 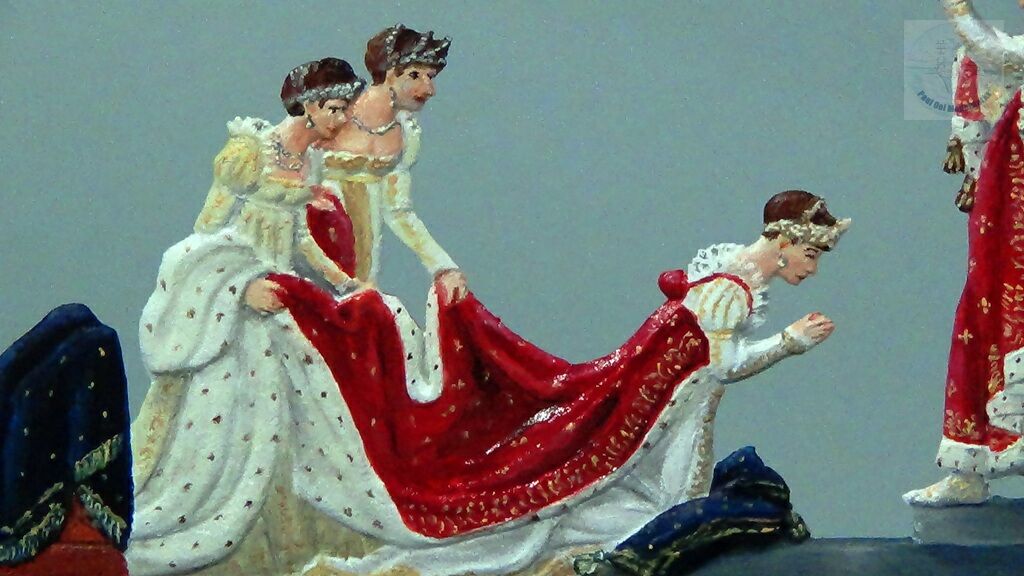 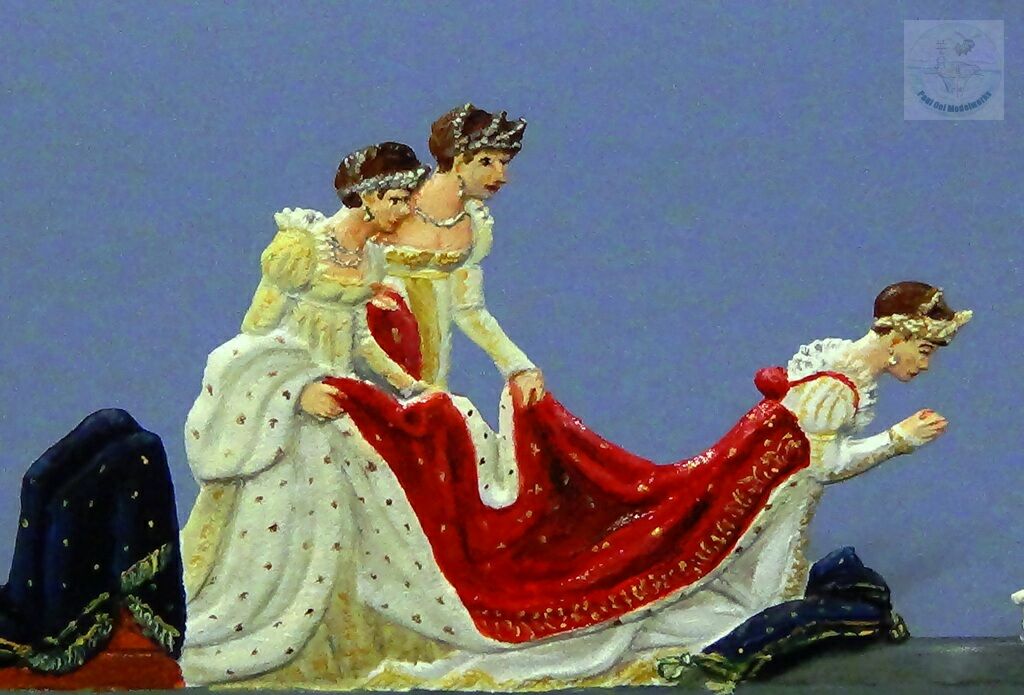 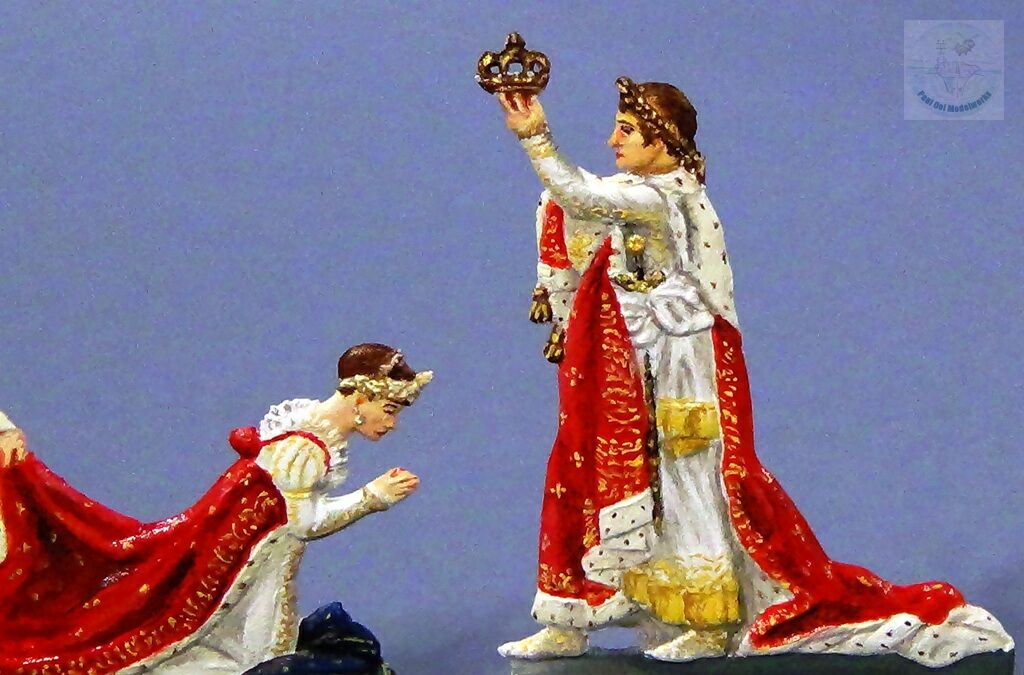 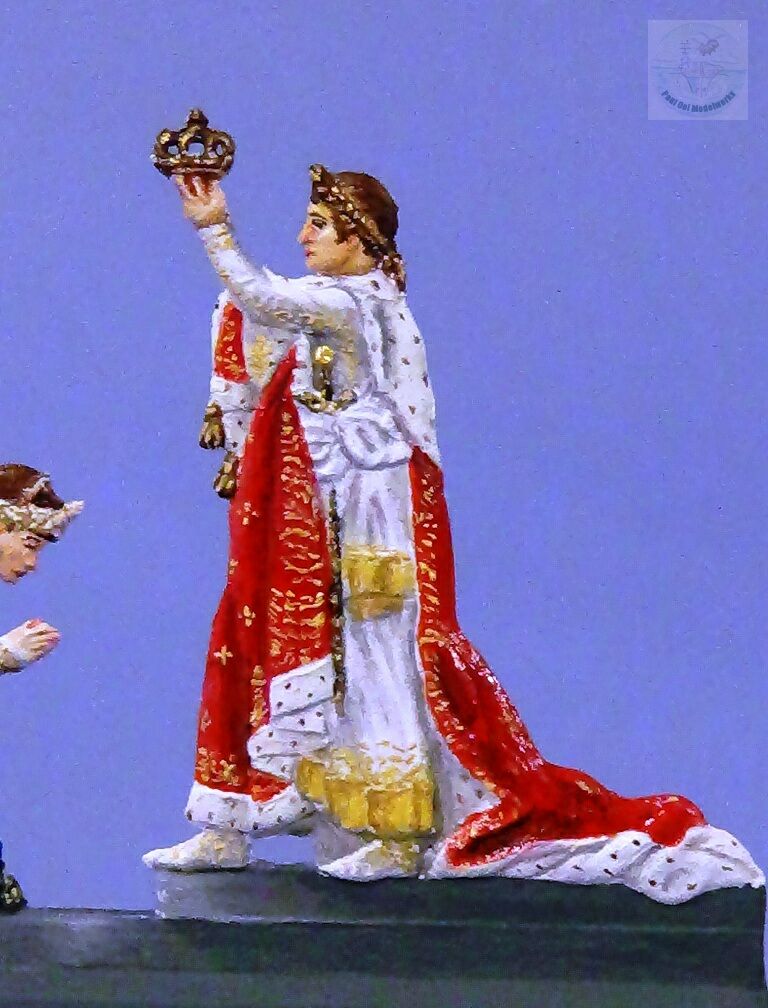 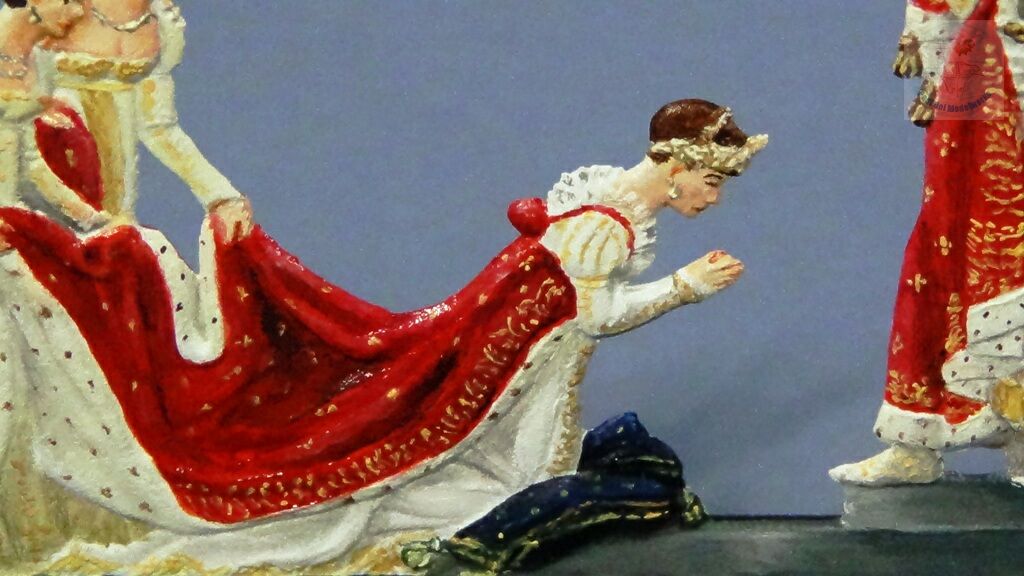 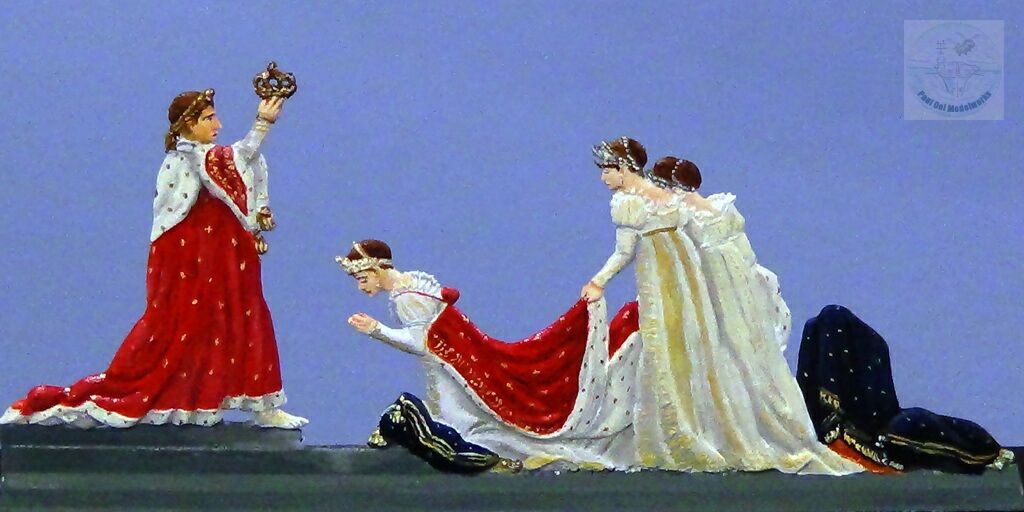 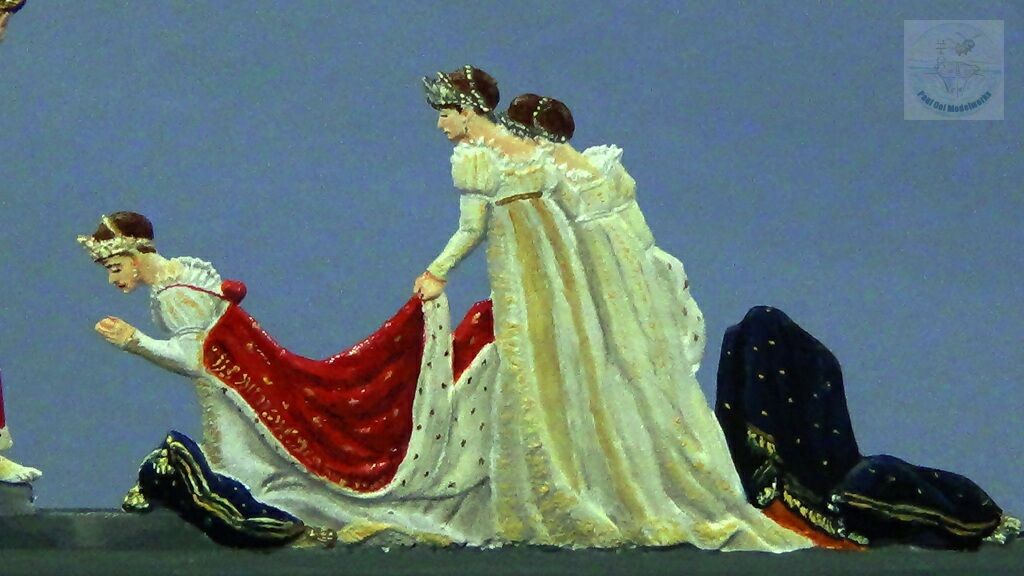 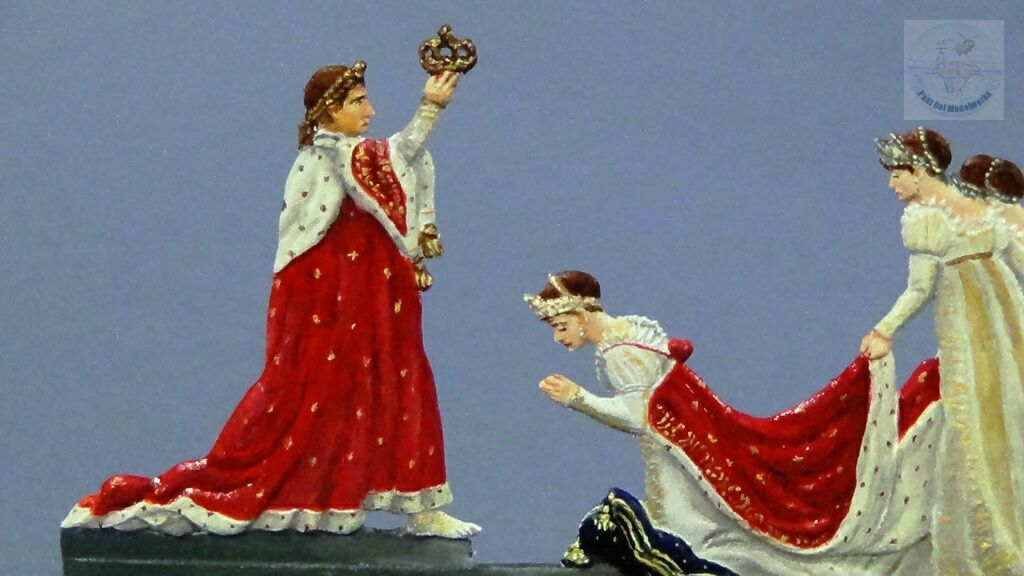 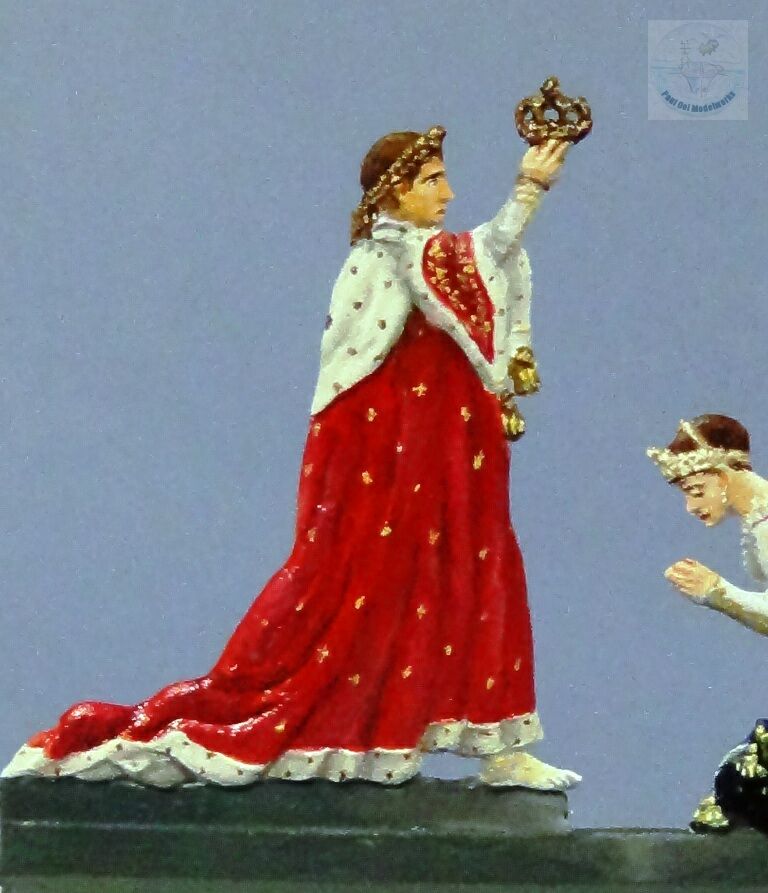 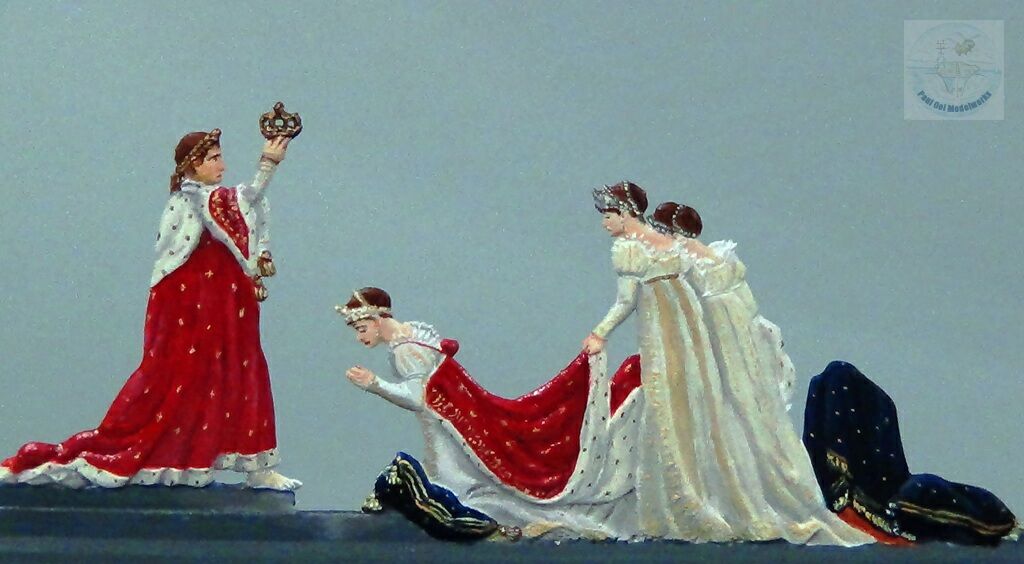 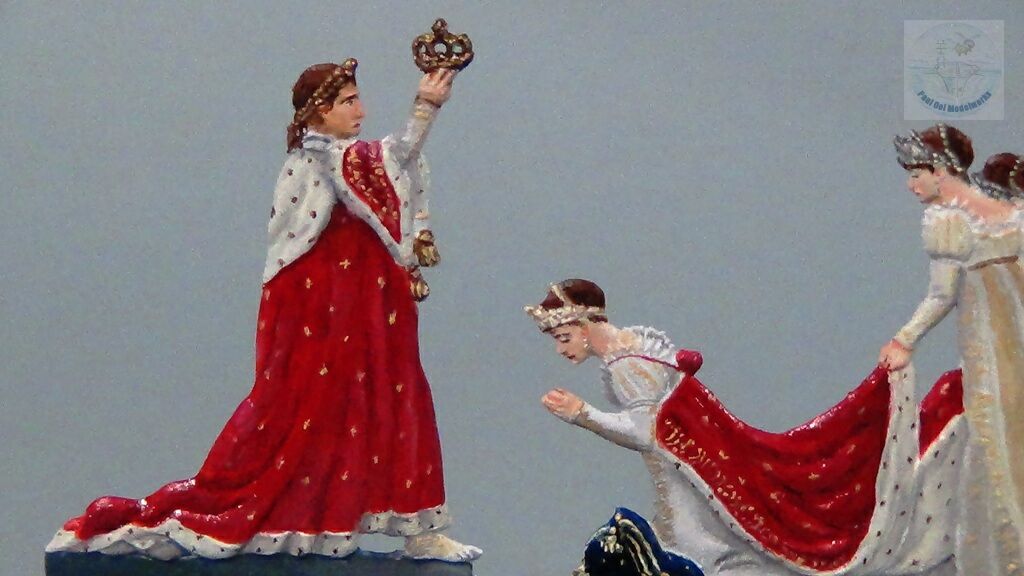 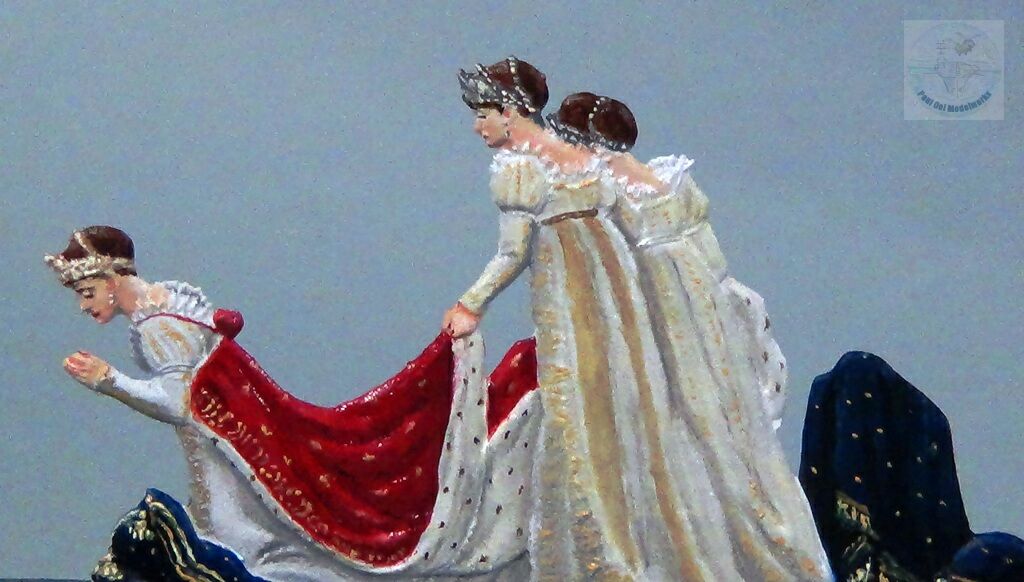 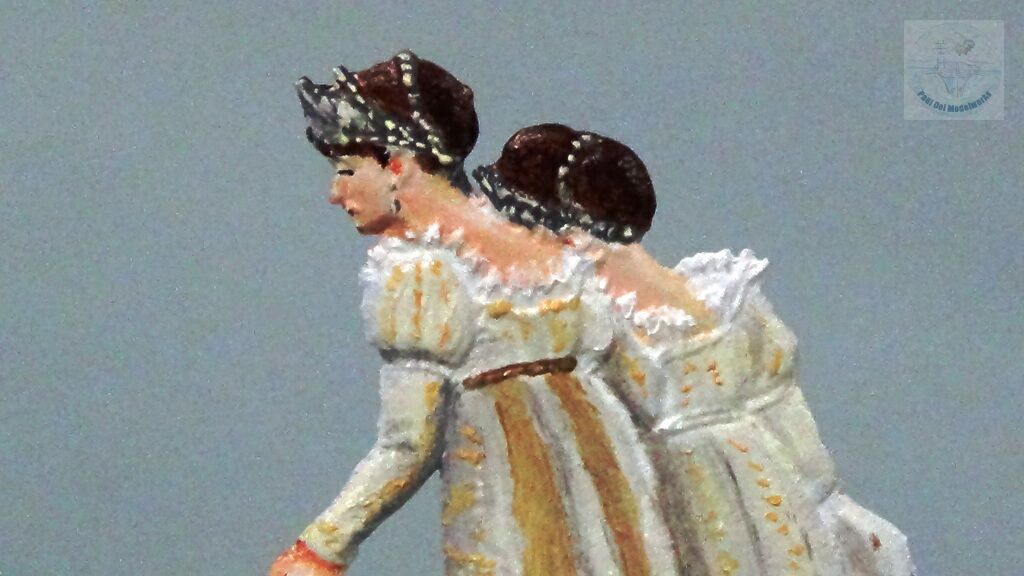 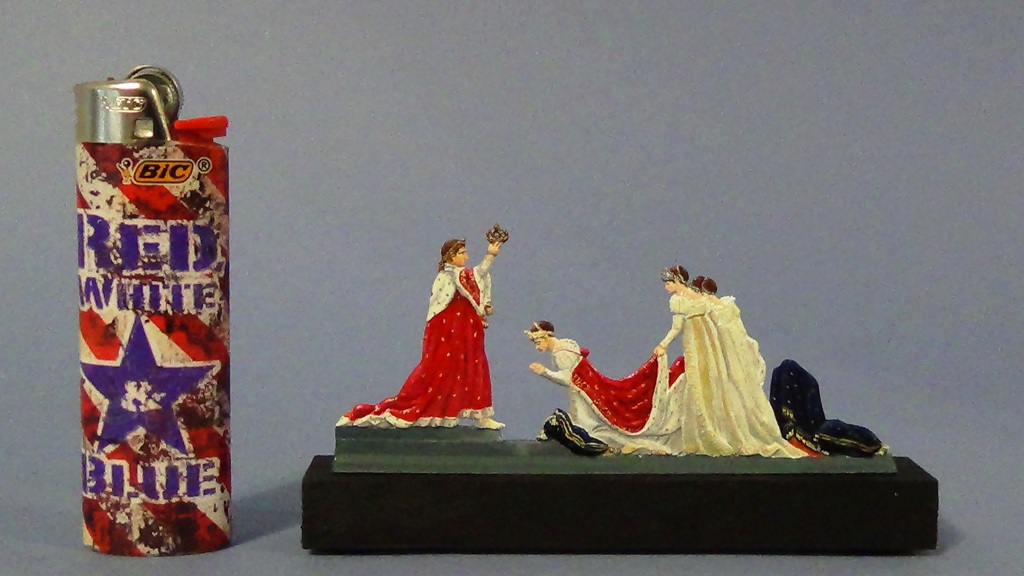 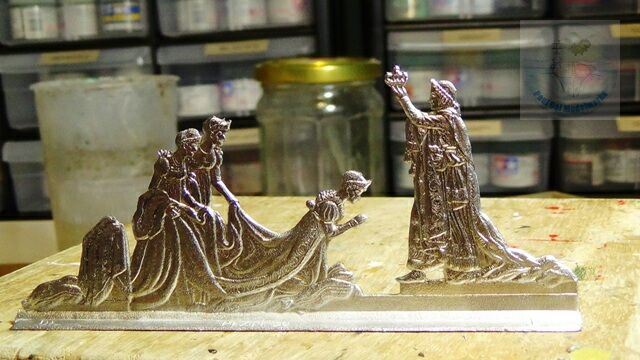 I obtained this 30mm flat figure set made by Jean Barriere from Segom of France, together with several other Napoleonic flat figures that I hope to paint in the near future. The level of detail is exquisite and even without painting, is quite pleasing to look at. Since the actual David painting only provides the details from one side, I had to deduce what the figures would look like from the other side. It helps that several websites have replicas of Napoleon’s coronation robes, and there are several other paintings of Empress Josephine on coronation day that provide alternate views of her gown. 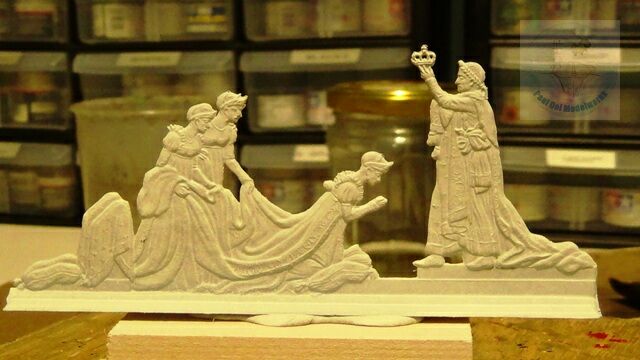 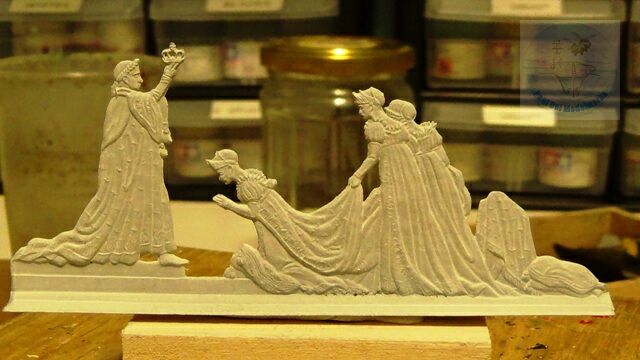 I primed the set with white primer paint instead of the usual grey. Most of the costumes are in white, so this will help to provide the brighter base needed for the overlaying oil paints. 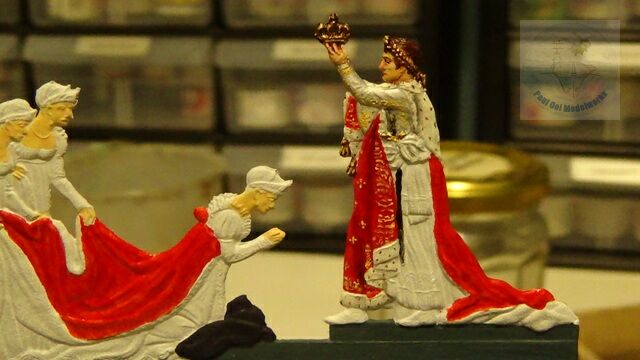 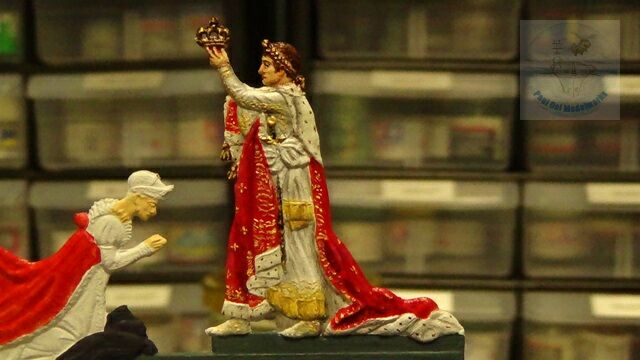 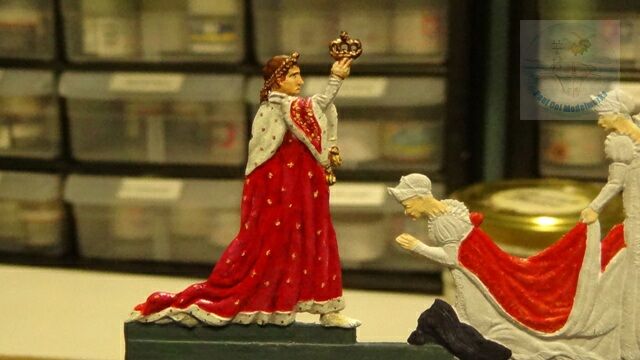 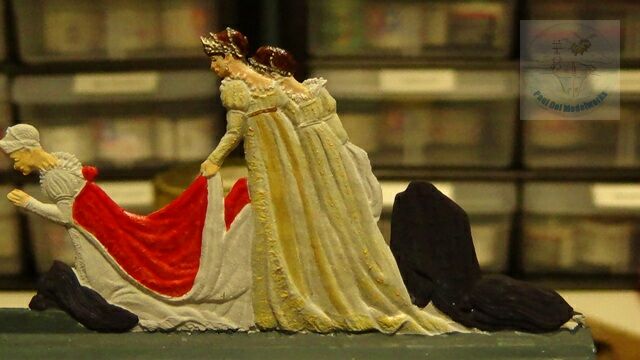 The two robe attendants have very similar colored clothes but the details are slightly different for the floral patterns. The dresses are tinted with mixture of Titanium White + Naples Yellow, and gold highlights similar to Napoleon. Tiaras and jewelry are undercoated with grey, and then highlights in Naples Yellow and Titanium White. 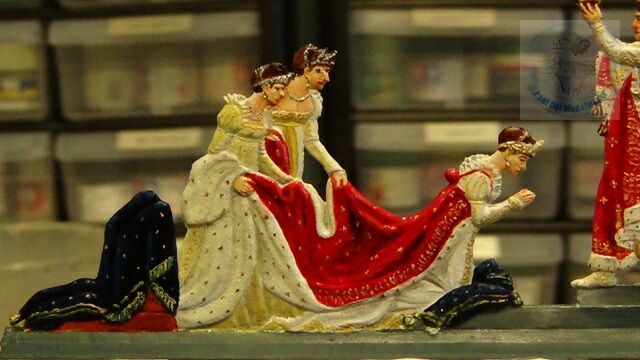 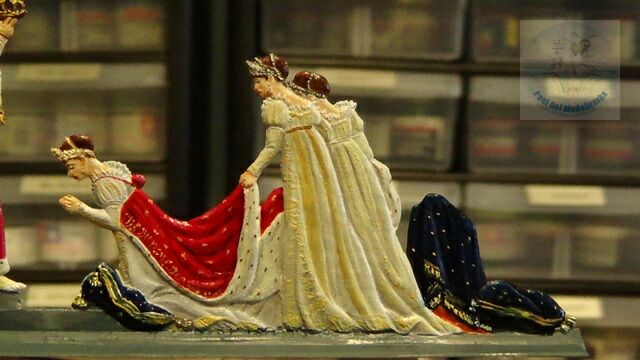 Empress Josephine has very similar colors as Napoleon and her two attendants, except that her dress is more white silk, so I minimized on the Naples Yellow tint, only keeping it for the ermine. The dark blue cushions are painted in Prussian Blue oils, with white added for highlight, and a mix of Naples Yellow + Burnt Umber for the gold trimmings.

Voila! A short and relaxing project (for me).