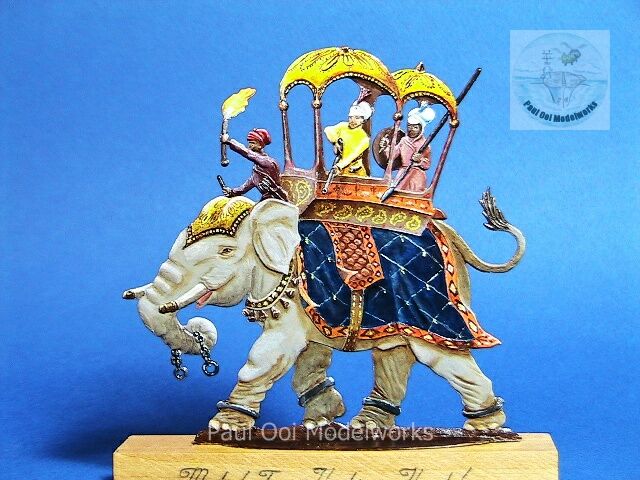 Variety is the spice of life and in my world of modeling, what greater departure from aircraft and ships can I take then to delve into the figure-painting sub-culture of the miniature tin flat figure or Zinnfiguren? The latter has been very popular for several centuries in Europe and still has a fairly large following there. In modeling flat figures, painting is paramount as the best flats have to create the illusion of 3D without the physical benefits of round figures. Play of light and tricking the eye takes on a whole new perspective, plus I like to challenge myself crazy! 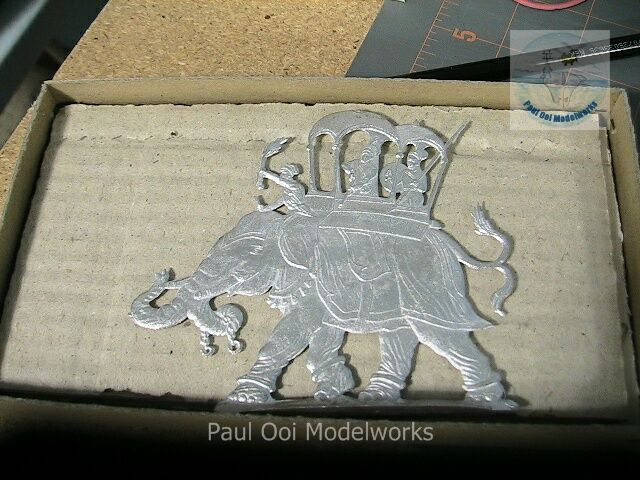 On a recent visit to Vienna, Austria I picked up a bunch of flat figures from a small but very interesting shop called Zinnfiguren Boehm. Drawers upon drawers of jewel-like figures from Ancient to Modern eras. I could have spent the whole afternoon there if it weren’t for the fact that I only had a short weekend and lots of things to see in town. I picked out this Indian Elephant from the Mughal period (1509’s to 1700’s) because it was unusual and had interesting details. The engraver for this piece is K. Rieger of Kiel, Germany. You may notice that the anatomy of the elephant looks strange (2 trunks and 2 tails). This is an ingenious method to create various poses using the same mold. The scale used here is the standard 30mm flat figure (the approximate height of each adult figure). 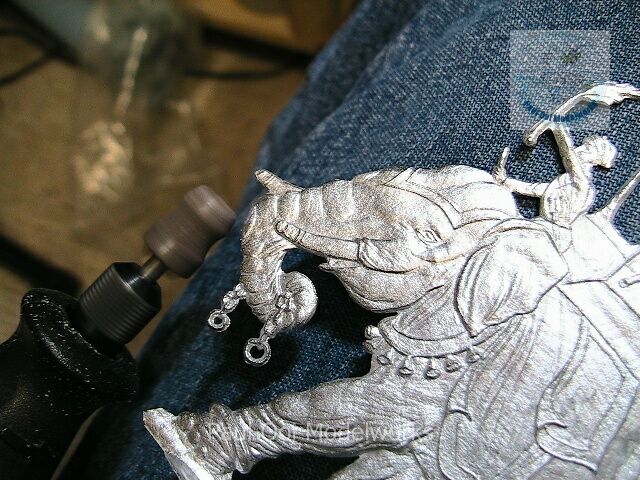 I start out by removing the extra trunk and tail to make the pose that I wanted. This has to be done carefully to prevent over-removal. After this, I use a machine tool fitted with a burnishing brass brush to polish up the surface of the metal cast without removing the engraved details. 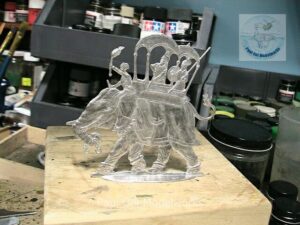 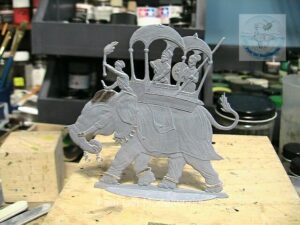 The polished and deburred figure is then primed with grey primer paint. Some sections as left off as I intend to use the natural shine of metal as an undercoat for metallic parts. 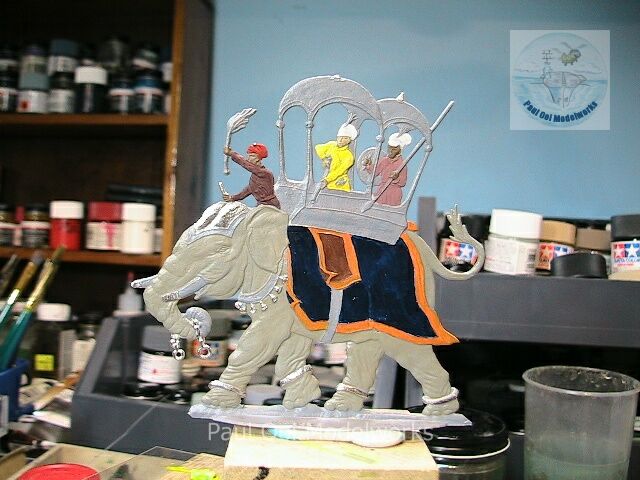 Painting starts with acrylic paints to provide coverage and the base color for detailing later on. The choice of colors are important as they will help to bring out the details if done correctly. Michael Taylor’s excellent book on Flat Figure painting provides valuable guide on color matching to get the shades needed. 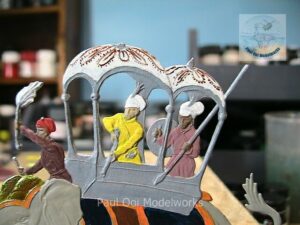 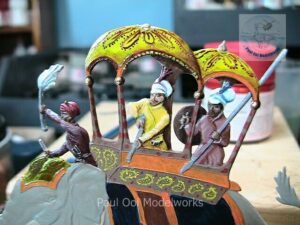 Like regular round figures starting from top to bottom, I worked on the human figures and the howdah (fancy box gondola strapped to the elephant) first, adding shades and details in layers. Most of the light play comes from the firebrand being wielded by the mahout, shining on the front of the figures but casting deep shadows behind them. 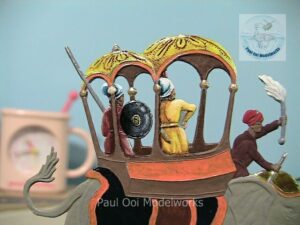 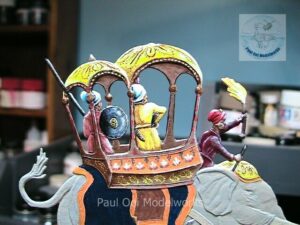 Working with flats means that you get to paint it twice, with very different light situations as it appears to the observer. This is the rear of the howdah with more shadows. 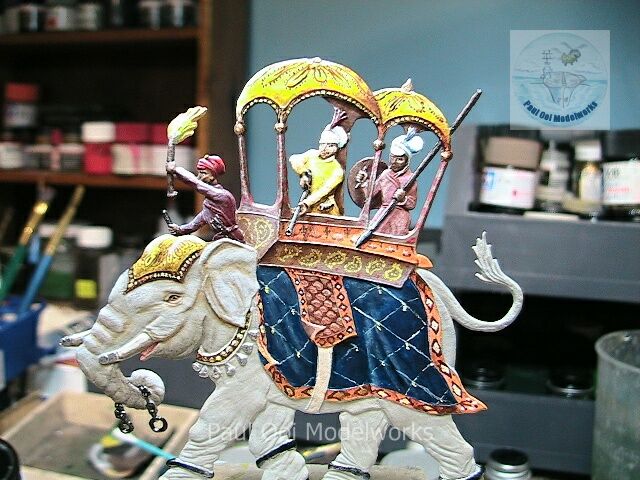 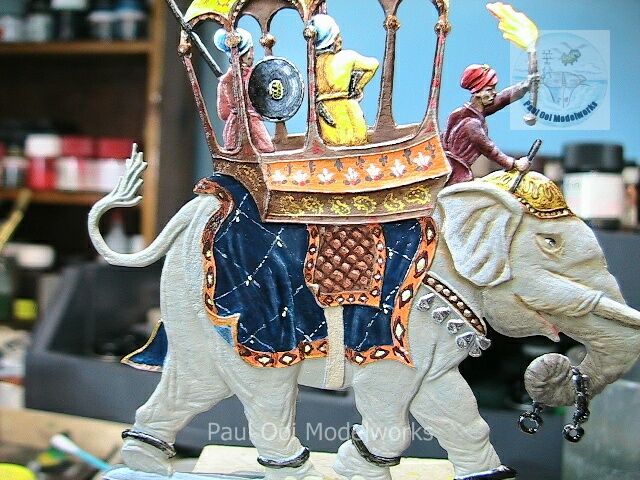 Once the upper details are completed, I worked on the elephant and the large cloth-and-leather cover. The pattern motifs were derived from several reference books on Indian and Persian rugs. Again, the play of shadows on the limbs of the animal and the fabric was very challenging. I finished this project in one week, a short holiday from the nuts-and-bolts of modern machinery. It was a nice break and I have a few more flat figures to work on :). I hope you enjoy my first attempt at flat figure modeling. Now, I need to find a suitable flat figure tiger for the Maharaja. 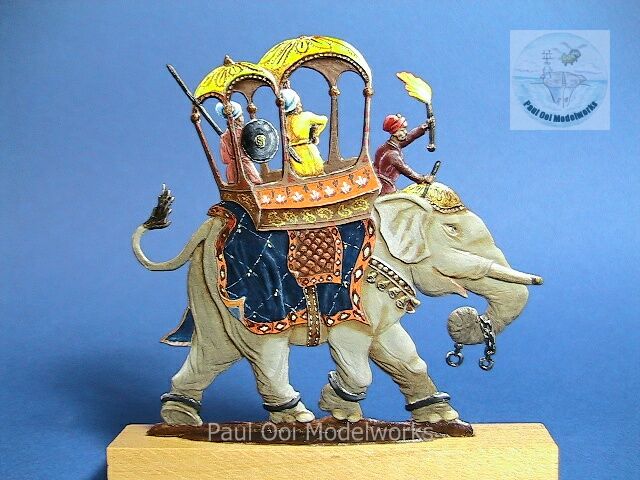 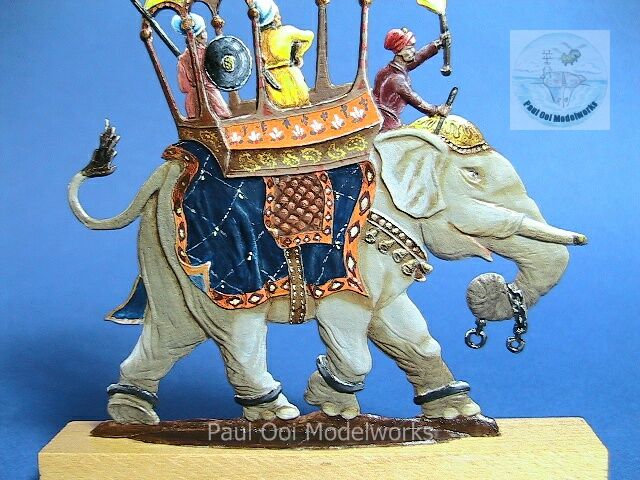 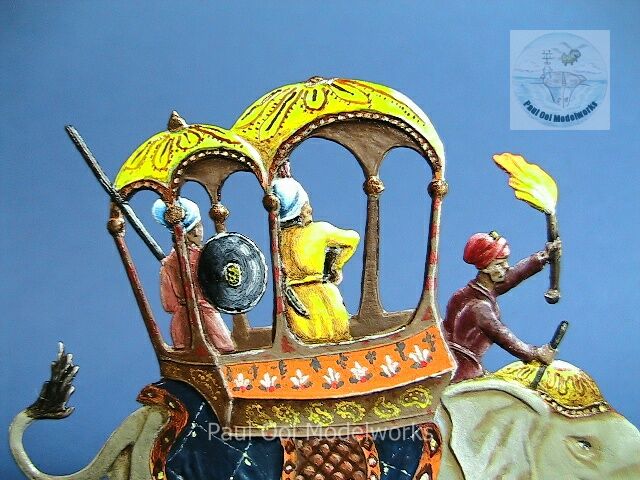 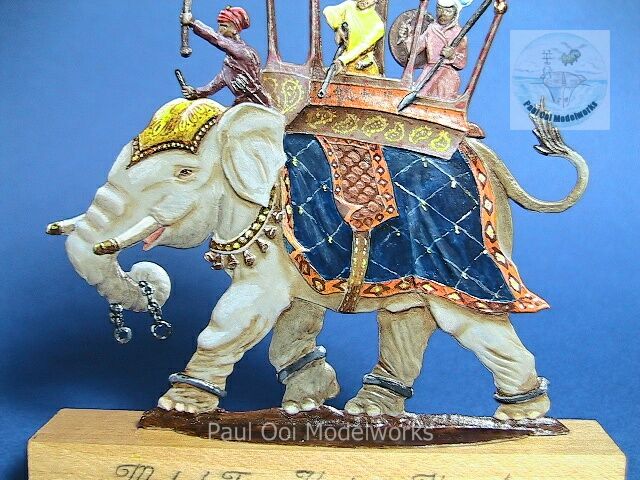 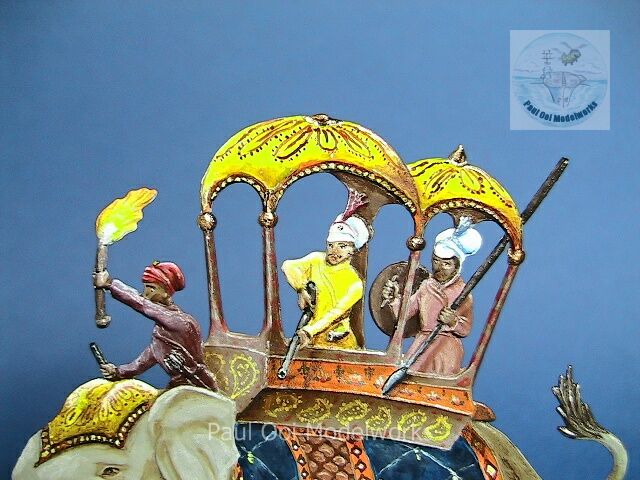