I have always wanted to build a diorama of capital warships trading blows in the high seas in a Pacific Theater setting. There aren’t many easy ones to choose from because by then most of the dramatic actions involved aircraft carriers trading air attacks without the combatant ships being in sight of each other. One of the last battleship-on-battleship fights in the Pacific was the Naval Battle of Guadalcanal which resulted in the crippling of the USS South Dakota and the sinking of IJN Kirishima.

On the night of November 14th 1942, without both fleets being fully aware of the presence or composition of the other, 3 battleships came within sight of one another and ended up slugging it out in a narrow body of sea between Savo island and Guadalcanal.

In trying to avoid the flaming wrecks of two other US destroyers from an earlier encounter with the Japanese fleet, USS South Dakota inadvertently steered too close to the Kirishima and her escorts, and they could make out her silhouette against the flaming wrecks. All the searchlights from the Japanese were directed against the South Dakota, with many shells hitting the main superstructure. A huge fireball erupted close to the aft turret.

In turn, USS Washington, sailing forward and more distant from the Japanese fleet picked up the Kirishima in her radar and concentrated all her salvoes against that target. Kirishima was bracketed by shell bursts and soon took several hits amidships.

By the dawn of November 15th, Kirishima was a burning hulk, with her rudder hopelessly jammed and listing. Later that morning, her remaining crew were evacuated and the ship was scuttled. The USS South Dakota limped away from the battle with major fires and a shattered superstructure but miraculously survived the encounter.

I used 1/2400 scale metal models of the ships to make this display. GHQ makes these very detailed miniscule models of entire fleets of warships under the brand name Micronauts and they are a delight to paint and build (with a magnifying glass!). 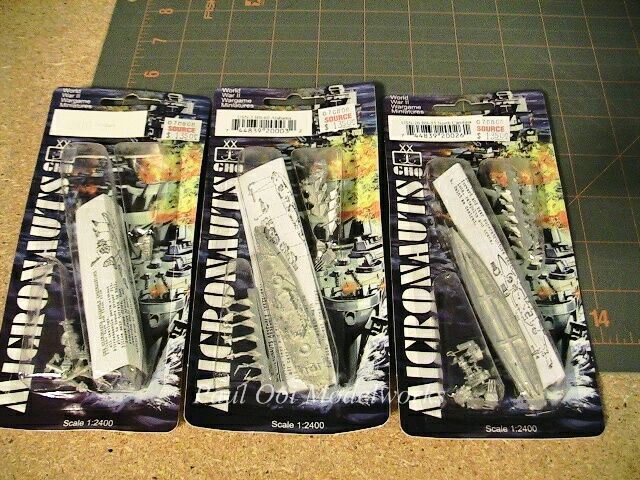 The mini-kits come with a single piece hull, several separate pieces for the forward and aft superstructures, turrets, cranes and catapults. I use a machine tool to clean and polish the white metal pieces in preparation for painting.

With these tiny models, I prime the parts with a black primer paint first. this helps to fill up all the little nooks and crannies that cannot be reached by a brush. Then I paint the details on the main deck and hull. 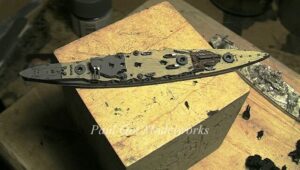 The superstructures, turrets and other parts are painted individually before being added to the ship. For Kirishima, the ship is predominantly painted IJN Kure grey with tan decks and red-brown linoleum seaplane deck. 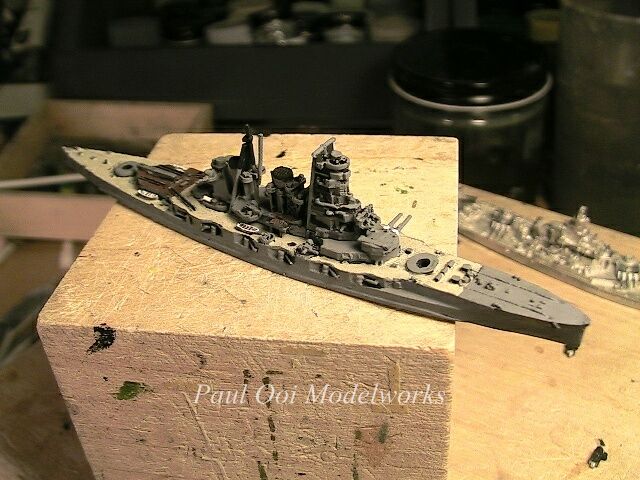 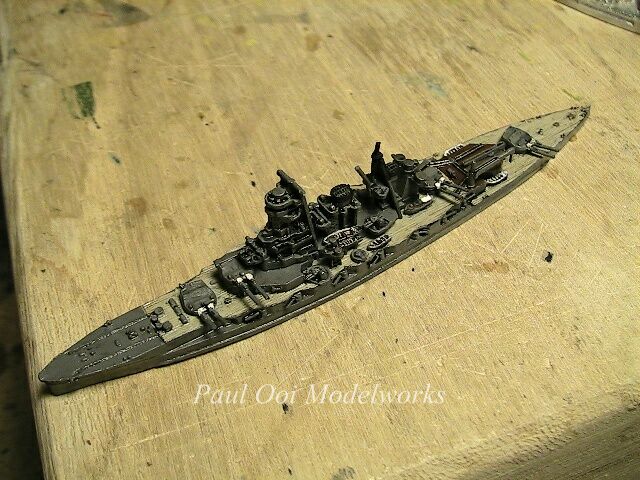 Similarly the US warships are also treated similarly except that the painting schemes are different. USS South Dakota carried the anti-air MS22 color scheme with Navy Blue hull ad superstructure, Deck Blue for decks. This give the ship a very dark cast. 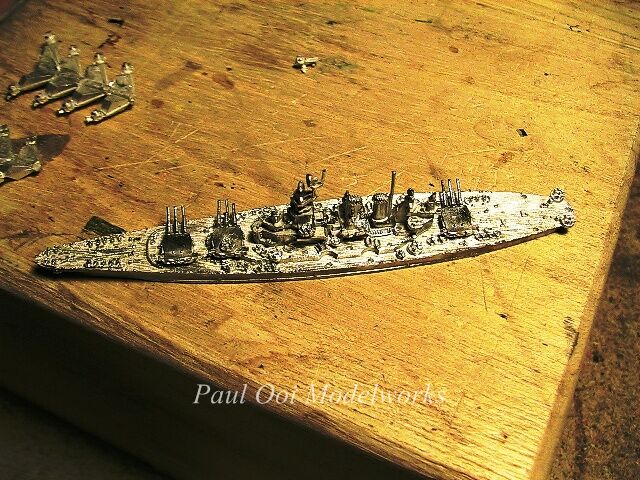 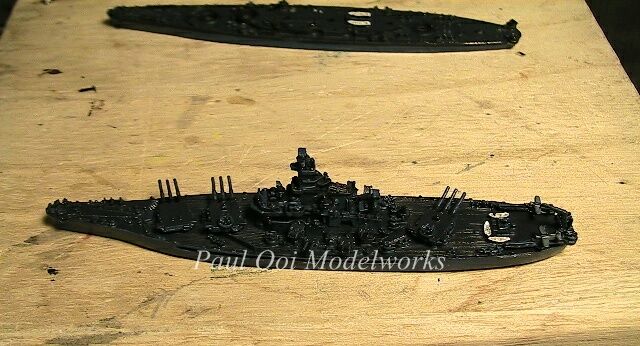 By comparison, USS Washington has slightly lighter colors from the MS21 anti-submarine color scheme. The hull is divided between a Haze Grey upper and Navy Blue lower layers while the superstructures were also in Haze Grey. Decks are also in Deck Blue.

I then try out all 3 ships on a piece of plastic “water” available from the railway section of most hobby stores. Historically, the US Navy ships were about 3 miles away from the the Japanese task force (in scale that would have been 6.5 feet away). Taking artistic license (that’s scale modeling!), i placed them closer so that I could get them onto one display vignette. 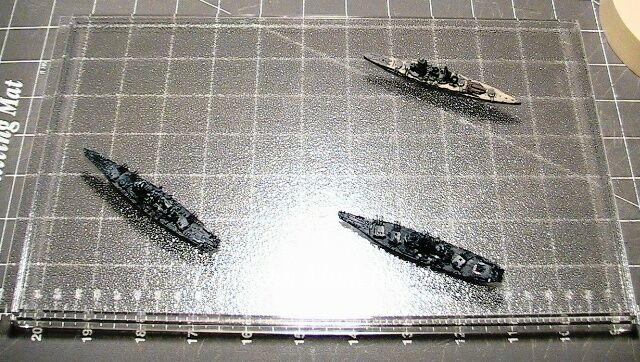 Once satisfied, I painted the plastic “water” sheet gloss blue and glued down the combatants onto the display. The geysers of water and explosions are sculpted out of modeling plaster and the wakes of the ships carefully painted in. 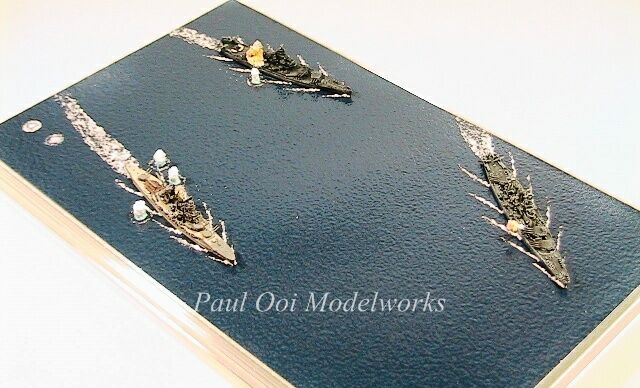 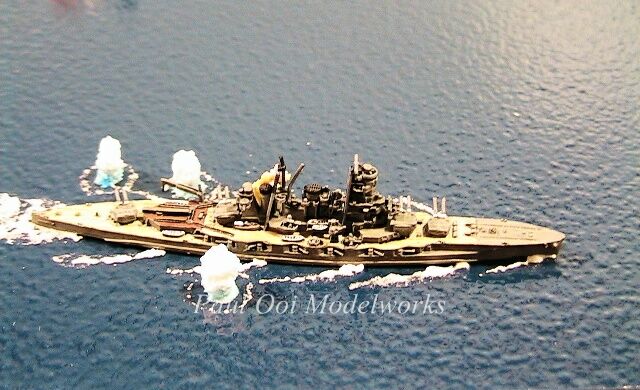 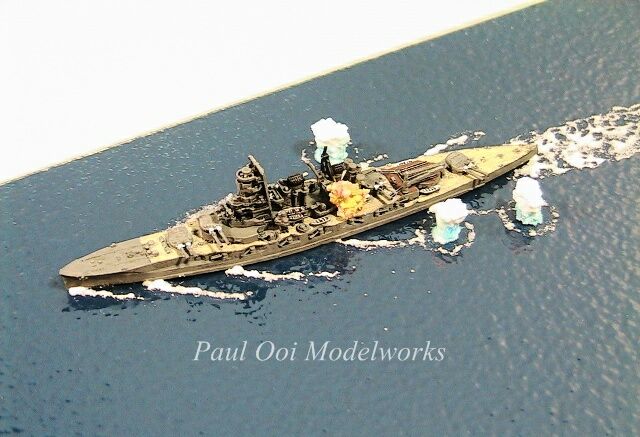 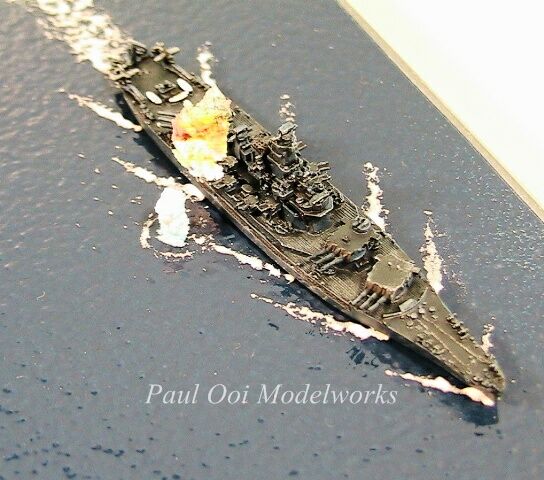 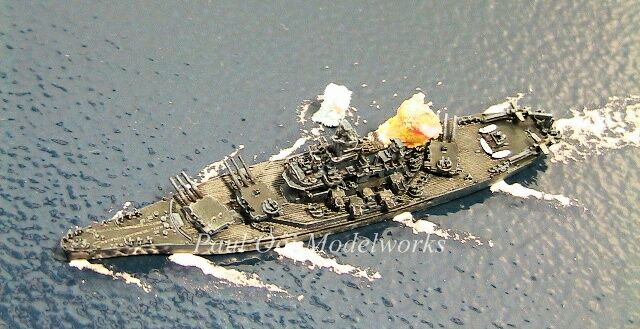 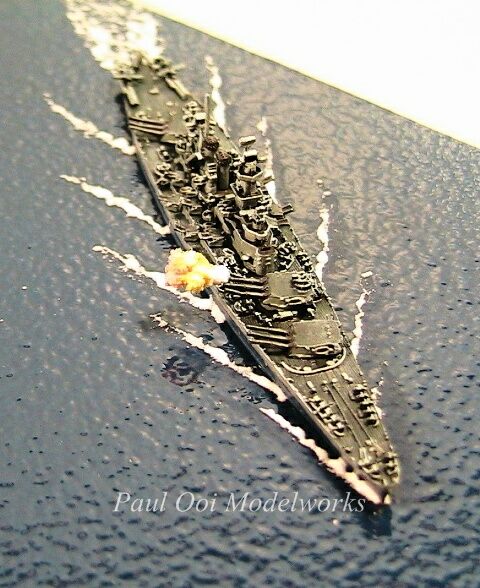 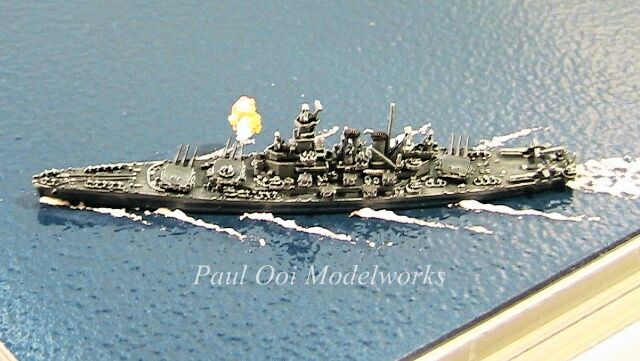