In the early 80’s the Soviet Union significantly upped the ante against NATO carrier task forces when the nuclear-powered Kirov battle cruiser class was launched. The Kirov was armed with significant anti-shipping missiles (P-700 Granit, NATO codename Shipwreck) that were custom-built to penetrate carrier task force defenses while also carrying other surface-to-air and anti-submarine assets. The Kalinin was the third ship in the class, commissioned into service in 1988. She carried the later Kashtan close air defense system batteries in place of the earlier 30mm gatling guns and differed from the lead ship Kirov in her rear superstructure appearance. She was also equipped with a single rear turret with twin-mounted 130mm guns. After the collapse of the Soviet Union, Kalinin was re-named Admiral Nakhimov in the new Russian Navy. 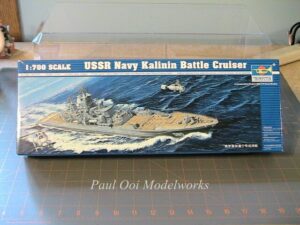 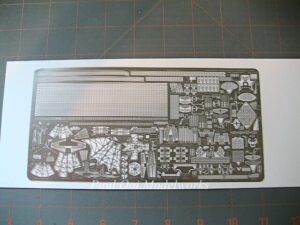 The 1/700 scale kit for this model is from Trumpeter China and I also used Gold Medal’s Soviet Destroyer/Cruiser photo-etched parts. The latter is really good since you get to model any of the Kirov ships in either the early or late configurations (plus lots of other spare parts for Udaloy, Krivak and Sovremenny class destroyers). While the kit is largely accurate, I had to really check real life photographs of the Kalinin to get the color of the helipad and missile hatches corrected from the paint reference provided. 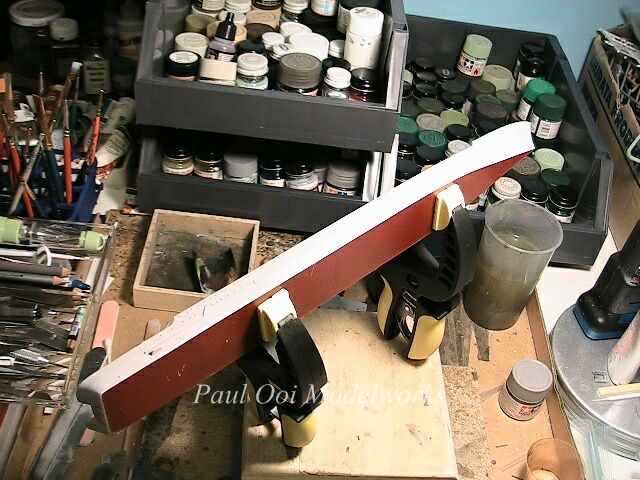 I start by painting the main single-piece hull in Barley Grey. After that the bottom flat waterline plate was glued to the hull. 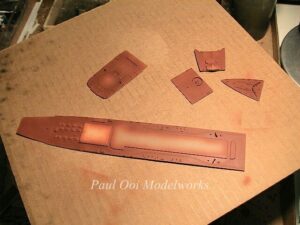 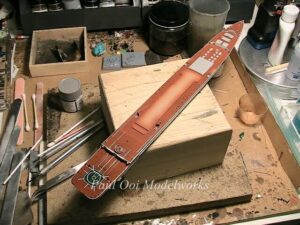 The main deck pieces were painted separately and then attached to the main hull. I detailed the helipad completely including the decals. The entire deck surface was sealed with high gloss varnish, similar to the actual Kirov decks in the Soviet era (a bit different from the current appearance on the Pyotr Velikiy). For the deck color, I used a mix of Tamiya Red Brown and Tamiya Orange on a 2:1 ratio. 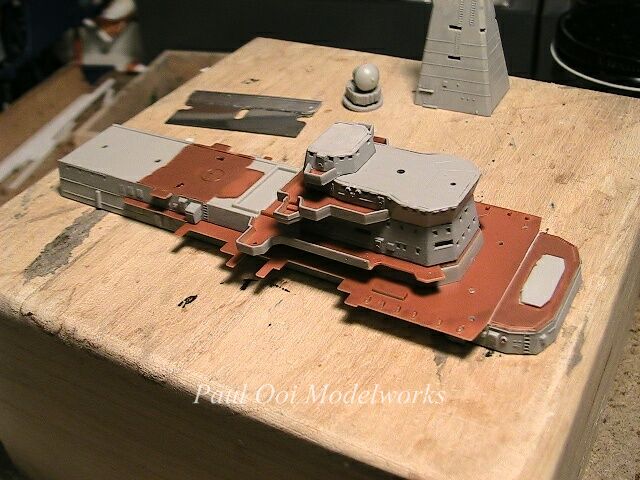 Next, I started with the forward superstructure, checking and adding the layers, painting the decks as I go. I moved from front to back, getting to the fore mast and smoke stack/radar platform and then the main mast radar stack. 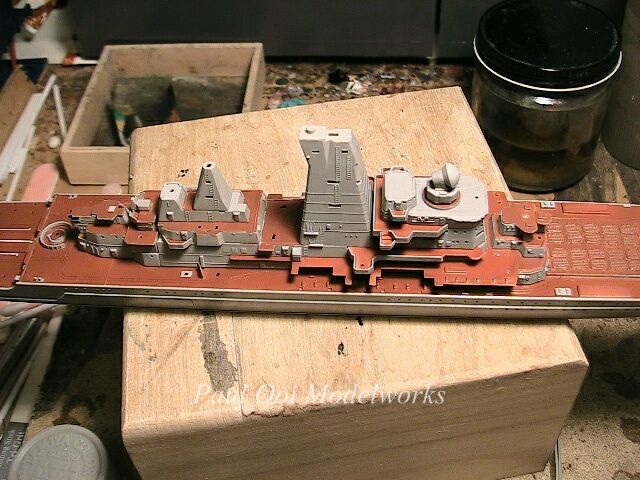 The superstructure platform finally got mounted onto the main deck. It had been almost a month to get to this point. 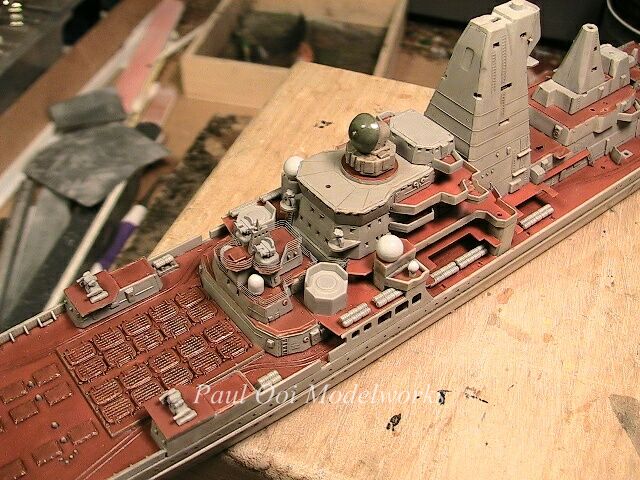 The finer details of the superstructure got added bit by bit. The radar elements and searchlights are little fiddly things that need to be handled carefully because they magically drop out of my hands or shoot out of the tweezers never to be seen again! I also add the platform railings at this time since they get hard to reach later on. 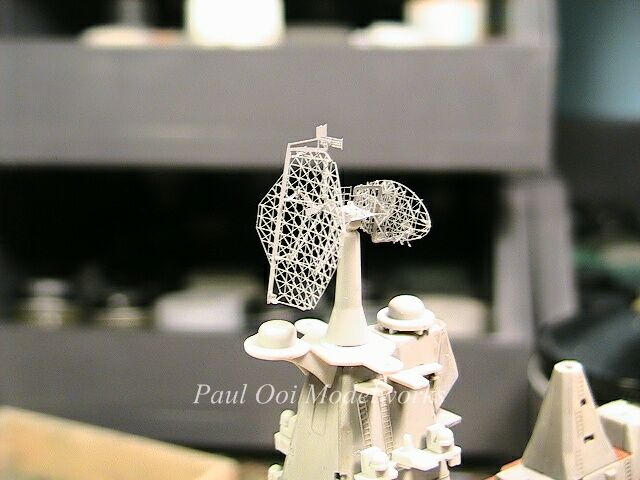 Now comes the scariest moment in photo-etch assembly. The foremast above the smoke stack is crowned with this huge, almost free standing lattice of radar sensor elements for the Voskhod MR-800 search radar. Many anxious moments getting all the minute pieces into place. The results are breath-taking and beautiful! 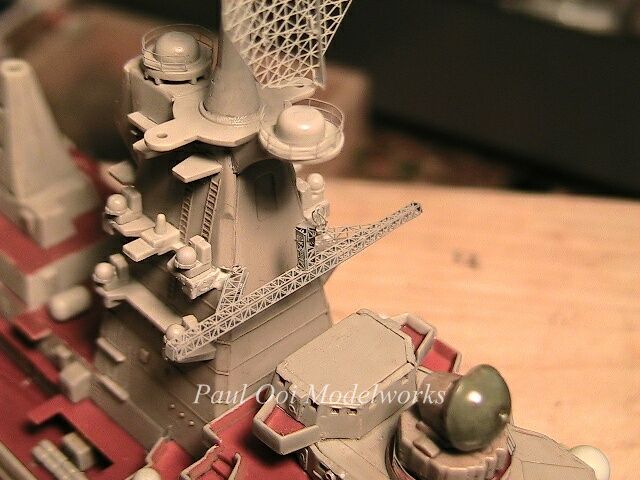 We are not out of the woods yet. Next I add the photo-etched yardarm, again with great care and constant checks on part alignment. 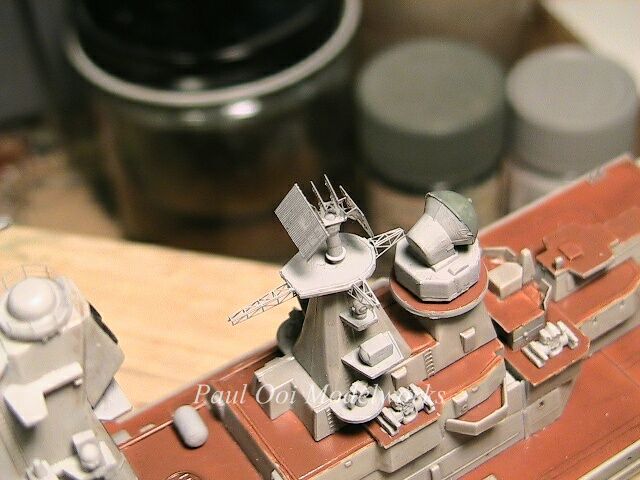 And then some more…..This it is the Fregat MR-710 search radar array on top of the main mast. The square elements are mounted offset relative to each other. 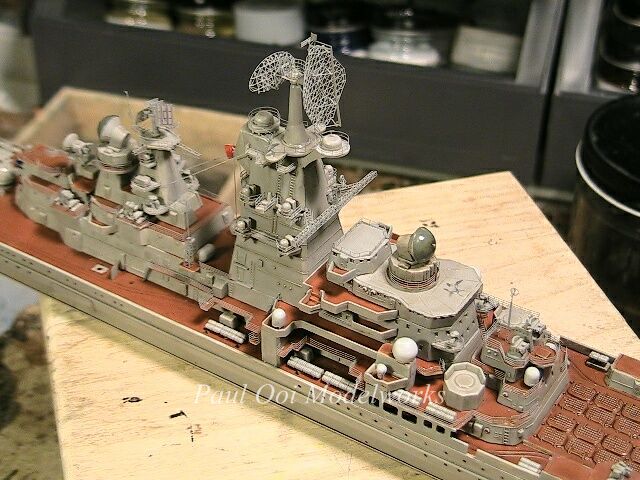 At the end of 2 months, I have gotten most of the superstructure details in place, including life-lines, antenna structures and the Kashtan missile emplacements. 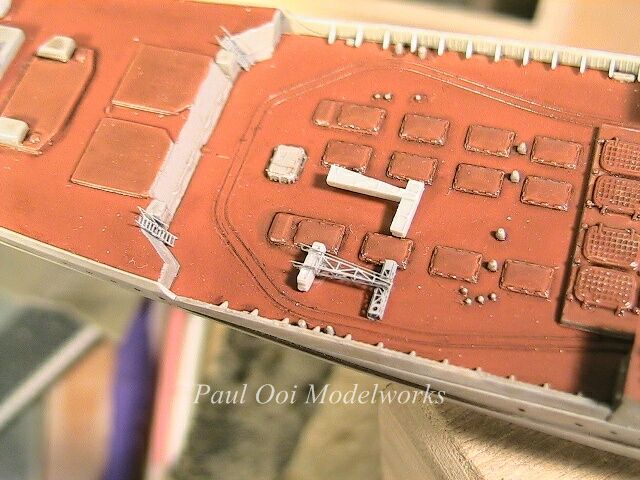 This one is the missile tender rig that I replaced with photo-etched parts. I have placed the the two parts side-by-side for comparison. 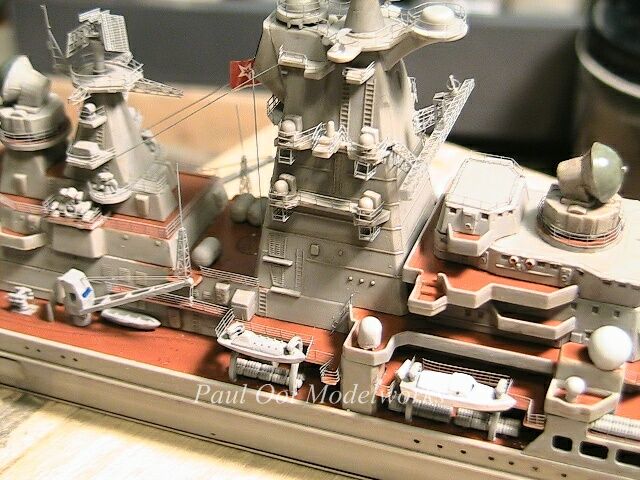 As we edge to the finish line, I attach the ship’s cranes, boats and motor launches hung on their davits. After these bits, the main deck’s life-line rails were added. 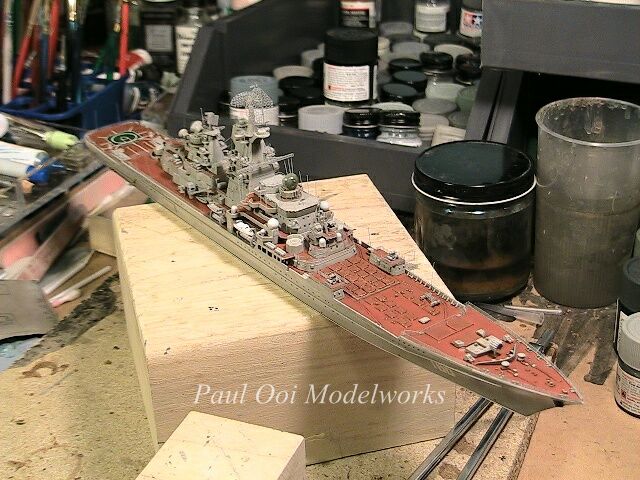 The ship herself is finally complete with all the antennae added and the red Soviet ensign hoisted behind the smoke stack. 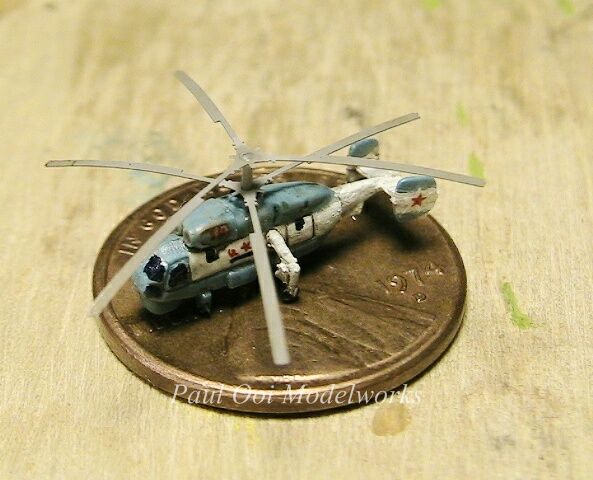 Next, I attend to these mini-projects, the Ka-27 Helix helicopters carried by the behemoth. They are anti-submarine helicopters and at this scale they are the tiniest model kits around. One of them can sit on a one-penny coin with room to spare! These homely looking ‘flying toasters” have an appearance that hide their deadly and effective role to sniff out submarines with their active sonar devices and hydrophones. 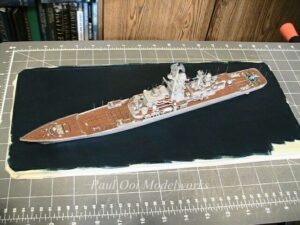 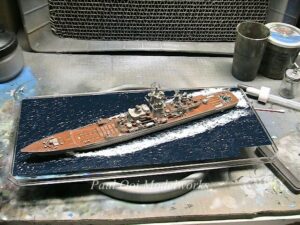 Finally I mount the completed model on a pre-painted base, followed by “sculpting” the sea out of acrylic gel all around her. The battle cruiser is finally out sailing in the sea! I painted the sea in pretty dark greyish-blue that is typical of the cold frigid waters covered by the Soviet North Fleet. 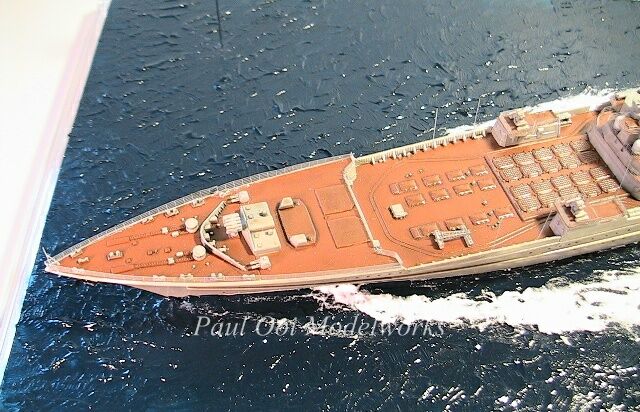 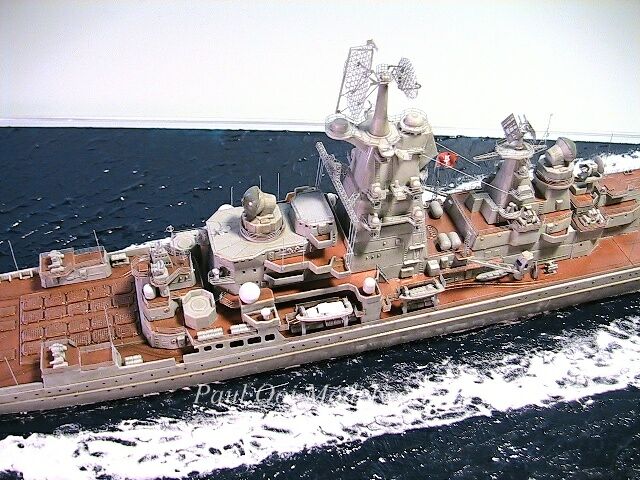 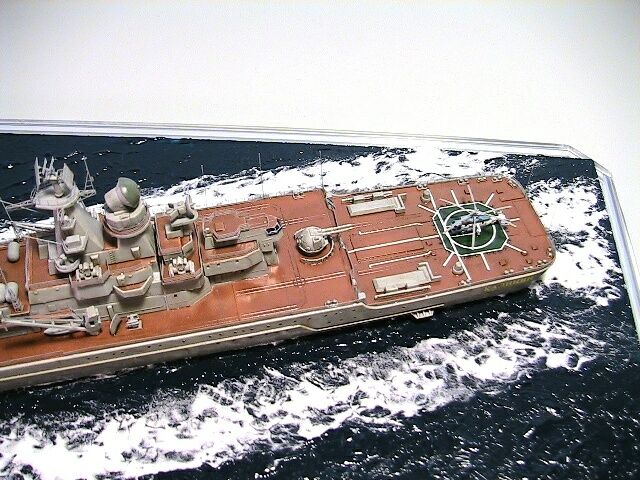 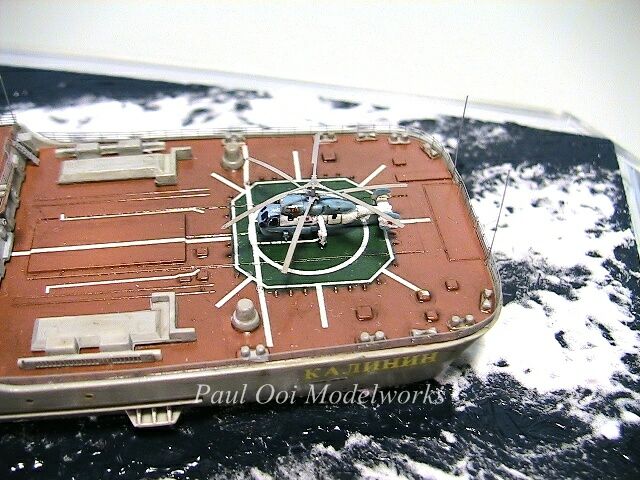 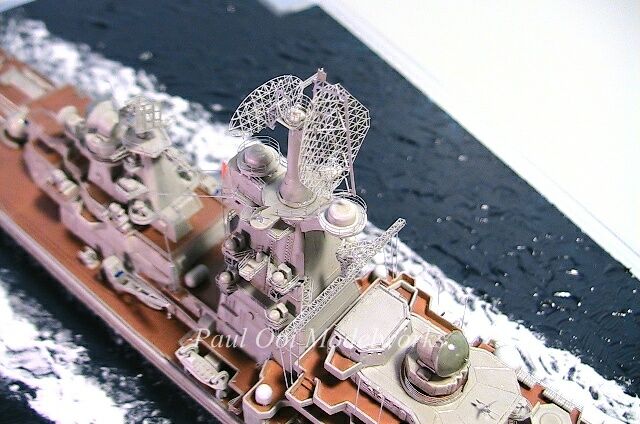 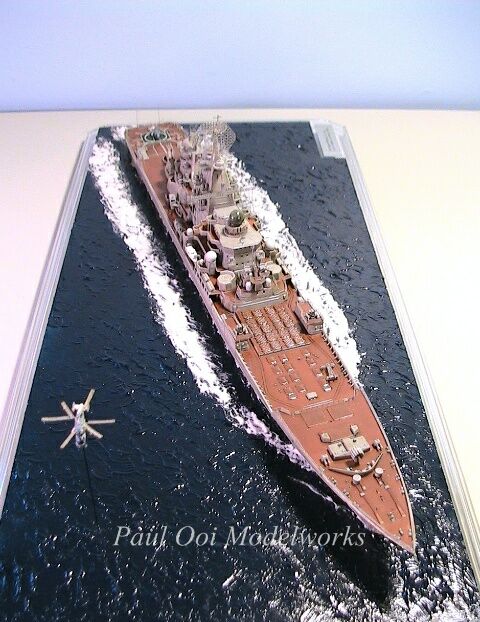 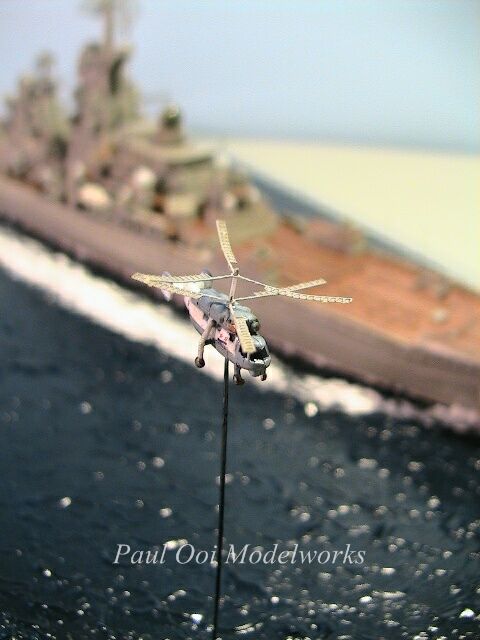 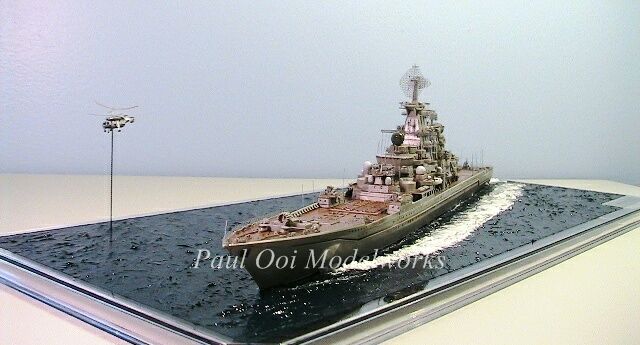